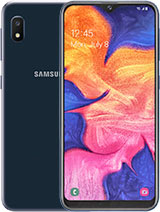 My new Galaxy A10e is fine.
It's not top of the line.
It seems very responsive.
It's a budget smart phone.
Low tech LCD, display.
It's small and light, fits in my pocket.
It was free with our new family plan

The specs are lower than my Galaxy 7 edge that was top of the line when I got it as a hand me down.
I didn't realise.

Our old phones, cracked screens, deteriorating battery life, and Verizon's cost for a 2gig data limit made us consider T-mobile.

Anonymous, 30 Aug 2020I have the samsung galaxy a10e and this shit sucks... freezes all the time, never gives me any... moresame for me

I just activated one of these for my mom; she bought the tracfone version (it runs on Verizon's network). I think it's a really nice phone, considering the price (this is the lower end of the spectrum).

Honestly it's pretty nice for the price; big screen, curved glass on the display is a nice touch!

This is not an $800 or $1300 phone you can buy it for about $200 or via QVC and Tracfone only $79! Really a pretty good deal, not a flagship so don't expect it to be as fast as one and there is nothing to complain about :) Although it is still a new phone I will report back later after she has had time to us it more.

Haven't tried the camera yet which most people complain about.

Mick, 20 Jul 2020I had the Galaxy Prime for over 6 years. Never had a problem with it. Worked great till most a... moreI have SAMSUNG GALAXY A10e and it runs very well for me. It calls out well and receives calls and texts well. My service provider gives discounts on monthly GB and DATA usages and for 75% to 85% all my downloaded apps run like lightning. There are a few glitches mostly caused by a few gaming apps I have, but I give the most current SAMSUNG phone I own now 4.75 outta 5 stars. I think the horrible reviews that I read on this blog are caused by crappy service providers that screw around with their customers no matter if U have a $100 $500 or $1000 iPhone or Android. Some cellular and WIFI service providers deliberately screw up their customer services because THEY ARE THE GODDAMN ONES TO BLAME on poor cellular services not the phone itself. So upgrade your service providers and your freaking SAMSUNG GALAXY A10e will.work a whole lot better for Christ sakes.

I have the samsung galaxy a10e and this shit sucks... freezes all the time, never gives me any notification for messages until I get on the application and it's so damn slow and just has been messing up so much since iv got it and only had it for a year. They said its brand new up to date but hell feels like one of the oldest dumbest phones iv ever owned besides iPhones and they suck also...

Every Samsung product I've owned has been garbage. From tablets to TVs. I have an S10 right now and it's junk I would list out all of its issues but there's not enough space in this comment section. I will never buy anything from Samsung again and neither will my 20 plus family members. One of the biggest phone companies in the world and can't solve simple software issues.

I'd rather carry my old boom box that required 8 D batteries, along with my very first 13" black & white television, along with my old ass transistor radio than carry this POS! I'd bet my bottom dollar that I would still get info in quicker real time with all that old shit than I ever could with this piece of complete garbage!

Anonymous, 06 Jul 2020I am just curious as to whether or not the phone works. Talk text fb etc?The phone does not work very well at all.

This phone is JUNK! Never gives me any notifications! I will finally get a notification 3 hrs later on messenger! By then my mom has gone offline! So slow it makes you want to throw it across the room! Don't waste your money!!

Anonymous, 23 Jun 2020I like the phone overall-BUT-and they're BIG BUTS- the photo quality is buttcheeks, and the so... morethis phone's camera really is quite horrible. i think my tracphone from when i was 13 when they were very simple had a better camera than this phone.. absolutely terrible quality pictures.. my nephew could draw better than this things pictures

JJ, 02 Jul 2020The WORST phone EVER!!!!!!!!!!!!! I have never hated something as mush as i hate this POS S... moreI can completely agree with everything you said. Before this POS I had a samsung galaxy j7 crown. that was a great phone. always had service even out in the stix. This phone however... I hardly ever get 3 signal bars in the middle of a city with towers all around me. I rarely ever have any bars ever. load time is horrendous on nearly all applications. drop calls ALL THE TIME. can rarely send texts. just all around a terrible cellular device. DO NOT BUY THIS PHONE!

Well i got the android 10 this morning and iTs awsome

Anonymous, 23 Jun 2020I like the phone overall-BUT-and they're BIG BUTS- the photo quality is buttcheeks, and the so... moreI agree. Not only does it have poor sound quality, it stutters. My J4 was a superior phone by far; however, I was not able to use it, because Spectrum is on a different system than my other IP.

My wife and I received 2 of these phones from our daughter for Christmas last year, and we love them. Works flawlessly, great call connection, great battery life, runs all the apps we want, etc. Great bang for the buck.

I hate this phone with every fiber of my being. I have LITERALLY made THREE ATTEMPTS now to leave this POS of a "phone" a review. IT DOESN'T EVEN PERFORM IT'S BASE FUNCTION AS A PHONE!!!!!! I have to CONSTANTLY call people back because the screen freezes before I can get to the stupid call!!! I have to CONSTANTLY check my inbox for text messages it DOESN'T notify me of, and this is true for every other app with an inbox function. Not to mention, the thing is FLIMSY!!!! I'm a skinny guy, and the screen cracked within my first week when I sat on it. (Verizon won't fix because, you know, it's junk anyways). I thought the J7 was the worst phone I ever bought but this one takes the cake. I WILL NEVER BUY A SAMSUNG AGAIN!!! If you can't design an operable device than you shouldn't even sell it!!!! I really wish I could get paid to engineer such a piece of GARBAGE!!!!
TLDR: THIS IS A FLIMSY INOPERABLE POS GARBAGE phone DON'T WASTE YOUR MONEY!!!!!!!!!

Mick, 20 Jul 2020I had the Galaxy Prime for over 6 years. Never had a problem with it. Worked great till most a... moreIt's relatively rare to see positive reviews on gsm arena. I know someone else who has this model and they seem to like it too.

Amber, 30 Jun 2020I had a Galaxy Prime something or another and that piece of crap was better then this only 30 ... moreI had the Galaxy Prime for over 6 years. Never had a problem with it. Worked great till most apps went up to the 4 gig system. I got the new Samsung A10 e and love it. No problems Battery last for hours,even when I am running multiple apps at the same time . Some times I think people think they are smarter then the applications or system they are trying to run. If you just go with what a system can do and not expect it to do what you think it should do. You will be fine. Dammm good phone for only 100$ , best cheap smartphone I have ever seen.

Where is the actual home button? Sometimes it's there sometimes it isn't. Hate that they moved the power button also. Ok other than that.

Matt, 23 May 2020Sucks for you I have no complaints with this phone got it 3 days ago and been awesome for me m... moreI am just curious as to whether or not the phone works. Talk text fb etc?

peeweazie, 17 Jun 2020This is a good phone for my use and exactly what I was looking for at a reasonable price. I wa... moreI just bought a used (1 month) tied to the Boost Network for $40 in perfect shape.
I've had one of those UMX phones, oh my !
The UMX reminds me of an old black and white tv I once had that was missing the VHF knob.
Now this A10e might not be a 4k but 720?
Most definitely.