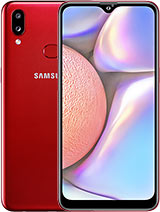 many people complaining, I got one as a gift from my sister and I loved the phone, the battery is very good, the screen is large, the memory and processor fulfills the functions I like and need to use.It is not a gaming smartphone, but for daily use and extra functions it is worth it. The speaker volume could be a little louder for listening to music, the rest is great.

Aj, 29 Dec 2020Been using it about almost a year now, was ok in the beginning, then developed lagging issues,... moreYou are absolutely right...I faced the same problems..this phone is super laggy...I got december updates 419mb I thought could save the problems but it gets worse day after day...Few time ago I experienced ghost touches n it is not the same time...I advise anyone to stay away from this crappy...am going to upgrade new phone asap.

Please, which call recorder are you successfully using on your a10s?

Been using it about almost a year now, was ok in the beginning, then developed lagging issues, takes some seconds to display caller when ringing, and now bluetooth, hotspot, wifi and radio stopped working.

I am buy tha sumsung a10s its very old type of a feature and like a control panal apps and themes . update to new version
In samsung.

I had Samsung J7 which is much better than A10s.. A10S is very poor in battery and hangs up frequently. Only camera is good

I've been using my A10s for about four months now and as a first time Samsung user, I feel Samsung phones are a little overrated. The battery isn't particularly exceptional. With heavy usage, lasts barely a day with 4G on but up to two days on wireless. Camera also not exceptionally good. My Tecno Camon CX beats it hands down. Worst feature for me are the speakers. They're so low. Or maybe it is this particular model that has made me so disappointed.

On the flip side though, it hasn't been all that bad. I like a lot of the features it provides particularly with software. CPU is relatively fast and memory doesn't drag even though it's the 2GB model. Charges pretty fast too.

I like it so much that I ordered my third (and last) one today.
The screens keep breaking, and repair is not an option.
Also it does not have a removable battery.

This mobile is loosing battery so fast/frequently.
I am so disappointed from this MOBILE.
Kindly help me.

anonymous, 26 Nov 2020yes it is available go to settings > display > turn off touch sensitivity No pal, i checked. Is not available on my device.

I used to be well updated with samsung phones back in the days..
But nowadays,, I even lost track about what samsung phone is new & trending.
If you're the type of individual that always wants to buy a new phone.
I'll say you'll waste alot of money doing it.
Cus this so called new models of phones list is endless,
There's always something new.
Especially the samsung A series.
Honestly if you ask me which Samsung A series phone is the latest,
I'd tell you that I have no idea cus there's so many models.
The thing is this phones don't seem to be different at all.
Only thing that changes is picture quality,ram ,internal memory mostly,
But either then that.
Nothing much..
Samsung making all this phone models are becoming to seem very desperate cus apple is making phones that are way better then their crap

Here's my 2cent worth of opinion in connection with the samsung galaxy a10s... Firstly I've owned this device since November 2019. The one I own is a dual upgraded to android 10. For an entry level device a10s is doing the most. Fingerprint reader is quick in response... screen is perfect... Battery is on steroids...2 days normal use... It has 32gb on-board memory, I've put additional 128gb memory card in it... So far the only downside to this device is the camera, night shots are bad... Other than that it's a pretty good device...

Starjack, 28 Oct 2020Do you have a tempered glass on your device? The only time i have issues with the screen on th... moreyes it is available
go to settings > display > turn off touch sensitivity

SamG05, 23 Nov 2020The same scenario to my phone...I will never buy MTK devices again.Mtk never works well with Samsung devices maybe Huawei or Oppo but with Samsung just go for Exynos or Snapdragon

Anonymous, 23 Nov 2020my a10s after 4months of using it has a ghost touch, and i always experience lag even in faceb... moreThe same scenario to my phone...I will never buy MTK devices again.