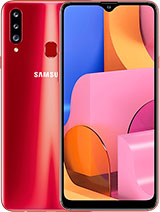 Tyshwish, 01 May 2021This has to absolutely be the worst cellular device I have ever had. Upon my first use for the... moreWas it refurbished or used maybe?

Amazing smartphone for the price.

It is fast, has great screen resolution, dual sim, rapid charging and probably the best feature, a fingerprint reader that I personally chose over the regular A20 version; that and the triple lens camera.

Downside is the sensitivity, or lack thereof, of the screen.

Have used this phone everyday for over a year, mostly for high-graphic high-memory gaming. I am one of those people that is constantly charging it too much, but it's still holding great charge.

Best phone I've had by far. Can't wait until my Android 11 update with OneUI 3.1!

Highly recommended for the price minders out there. The gaming people as well will enjoy the 4 GB RAM (6 GB RAM version also available). Lots of features that are not available on the non-S variant makes it amazing. It is my snazzy blue workhorse and I love it!

I wait for update why can't you realise update Samsung galaxy M11 & Samsung galaxy a21s realeases a update of one UI core 2.5 you also realease it this is my query

That phone i buy was defective. Its not responding screen touch.

K, 08 May 2021Was given this phone for free, and it is still a miserable experience. The touch screen is alm... moreyou complaint to much for a free phone my friend hahahahaha

Tyshwish, 01 May 2021This has to absolutely be the worst cellular device I have ever had. Upon my first use for the... moreU must have bought a defective device or a second hand one. Coz when I bought mine, I did not have any headphone Jack issue, and my phone did not restart itself. I have used it for over a year. And not of these issues u stated has come up. If u are in Nigeria and u want to buy a phone next time, go to Slot.

Nene, 15 May 2021You must have a defective device because I have the same model phone for over a year now and i... moreSame thing I thought...he must have bought a defective device. Coz mine the camera is ok although it is not super clear like wat u will see in A51, but both the front and back camera is ok, the battery last long, and has a fast charging feature. I use glo with it and my network is always stable. Sometimes if u listen to the way people complain about phones, I don't think someone will buy any phone sef. Coz b4 I bought my A20s, I saw reviews saying the battery is crap, d camera is crap, no network connectivity and all dat. But I still went ahead and got the phone and had none all these issues. The only issue I had was dat it jst started touching different apps on it's own, but lately I have not experienced such.

Cheb, 21 Jan 2021I just got this phone for just a month from purchase. Experienced this popping Notification sa... moreI don't think u bought the main Samsung A20s, cos I'm using it and the battery last long. The fast charging feature works.

I have had mine for a year and a half and i love it. Idk y people hav problems with it

K, 08 May 2021Was given this phone for free, and it is still a miserable experience. The touch screen is alm... moreYou must have a defective device because I have the same model phone for over a year now and it's working just fine.

Honestly it's not a bad phone for the price. My only problem was that i could not move certain apps to the sd card.

Was given this phone for free, and it is still a miserable experience. The touch screen is almost completely unresponsive, to the point that simple tasks become agonizingly slow and frustrating. I am literally switching back to an older phone just so I don't have to deal with this nightmare freakshow.

Anonymous, 29 Jan 2021My phone has network problem. It always shows 'not registered on network '.Same here

This has to absolutely be the worst cellular device I have ever had. Upon my first use for the first 2 weeks, my phone would just restart itself in the middle of the call. After a few months first my headphone jack stopped working completely(FOR NO REASON), a few days later people could only hear me if my phone was put on the loudspeaker and now one week later the phone refuses to charge which is the nail in the coffin for me. TEN OUT OF TEN I DO NOT RECOMMEND.

Jose B, 19 Apr 2021It is the worst phone I have ever had, the photos at night are a disaster, it takes about 1 ho... moreThis is the phone have been using. You don't even know what you are saying. The only thing that is that appealing is the front camera. The front camera is just average but the back camera is okay. Everything is working perfectly and also play good games like pes21 on it at ease without lagging. I just wonder if your phone is a cloned one.

It is the worst phone I have ever had, the photos at night are a disaster, it takes about 1 hour to take a photo with flash ... haha. Apart from this, it is also slow to function and it already gives me problems with the memory card, it already has dead pixels on its screen. Not recommended
In favor: a very good battery.

Like all currently available NEW android smartphones and iPhones, the screen or display is too NARROW. Therefore, after purchasing my Samsung Galaxy A20s, I'm still using my ZTE Zmax Pro (Z981) with its 74 or 75mm wide screen/display.

This is a budget phone. It serves its purpose of being a Budget Phone. But, there are better options out there like the POCO M3. However, if you are loyal to Samsung, then this phone is OK.

Reggie, 16 Mar 2021Don't be fooled by the 3 camera setup on the back of the phone because it's produces... moreBe producing your own perfect brand of smart phone and I personally will patronize you...🤨