The Galaxy A21s is your typical budget phone, but it doesn't have to look cheap. Most of the front is occupied by the screen, while the frame and the back are made of plastic. Samsung knows how to make a good-looking phone though, and we are not disappointed with how the A21s has turned out. 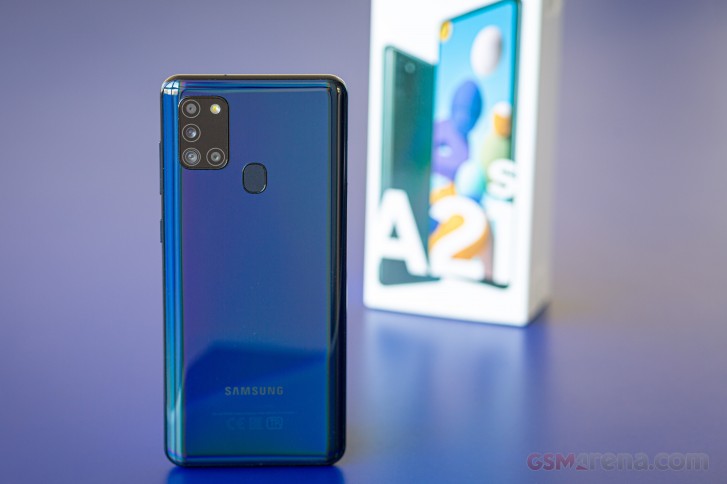 One of the Galaxy A21s key features is the 6.5" PLS TFT screen with a small punch-hole cutout around the top left. It has rounded corners as all other recent displays do, and the bezels are trendily thin.

The Galaxy A20 had a Super AMOLED, but for the A20s, the maker decided to switch to LCDs, and this was later applied to the A21 duo as well. Still, most of the A series comes with AMOLED screens, so you are not without options if prefer that. 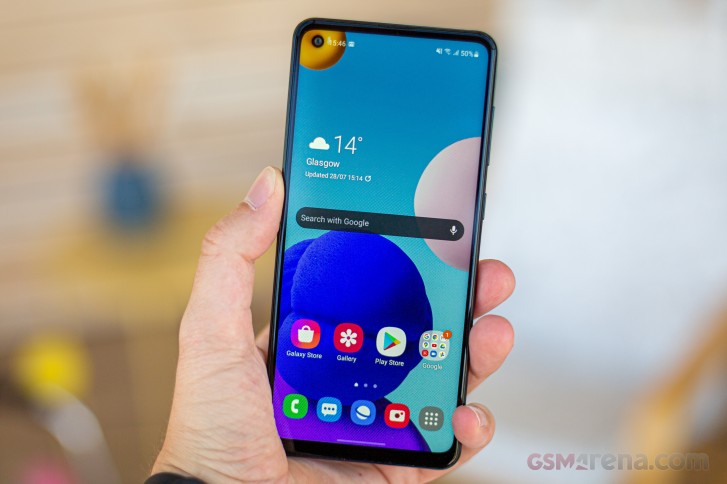 Back to the Galaxy A21s here, the screen looks okay for this class even if the colors appear to be a bit washed-out. And you can expect some uneven backlighting around the cutout, but that's to be expected for an LCD panel. Still, Samsung managed to keep this unevenness minimal as we've seen much worse from some more expensive offers. 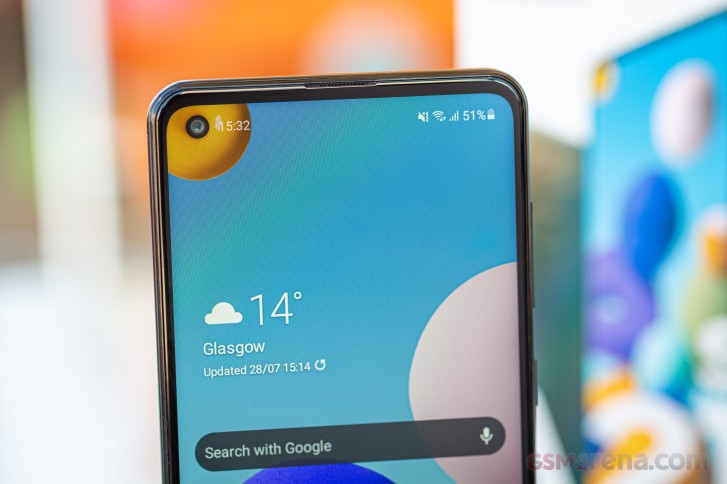 Inside the cutout is a small 13MP selfie camera. The earpiece grille is above the screen, where the protective glass meets the plastic frame. There is no notification LED light on the A21s, if you were wondering.

The frame is curved and made of solid plastic. It has a grippy matte finish, which makes for enhanced grip, especially when you are shooting photos or watching movies on the go. 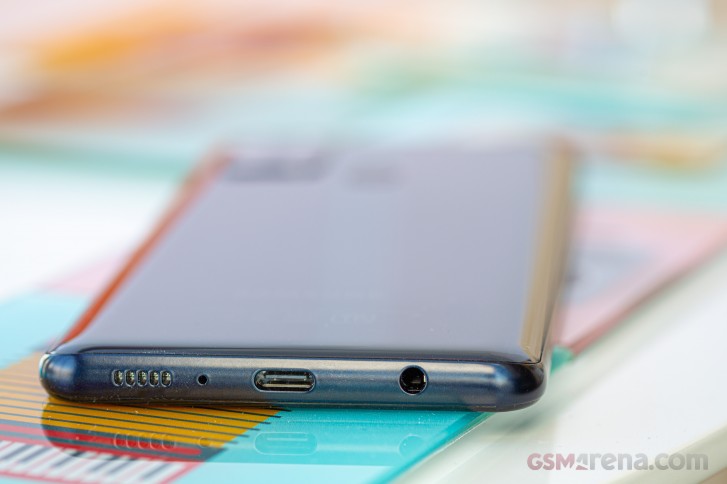 Around the frame you'll see all the essentials - the triple-card slot is on the left, the volume and power keys - on the right, while the bottom houses the USB-C port, the speaker, the 3.5mm jack, and the mouthpiece. 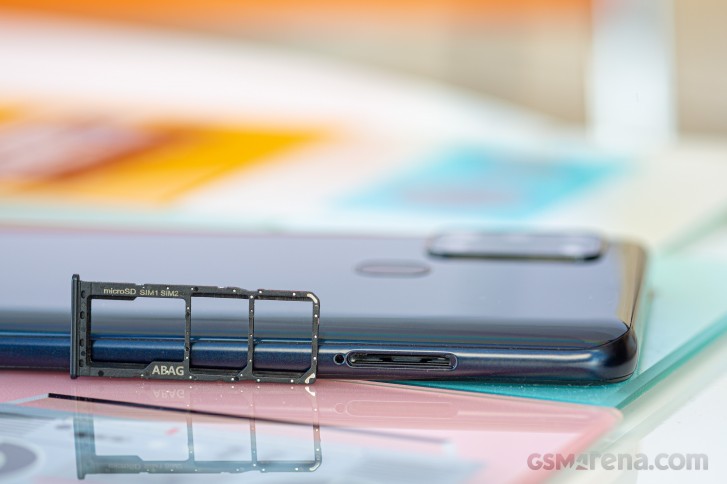 The rear panel is also made of plastic, but now it has a few different layers of paint, and everything is glossy. When the piece is not covered by fingerprints and smudges, it looks very cool - there is a subtle blue-purple-green gradient (depending on the reflected light and surroundings). But if you want to keep these good looks, you should know the back requires lots of cleaning. 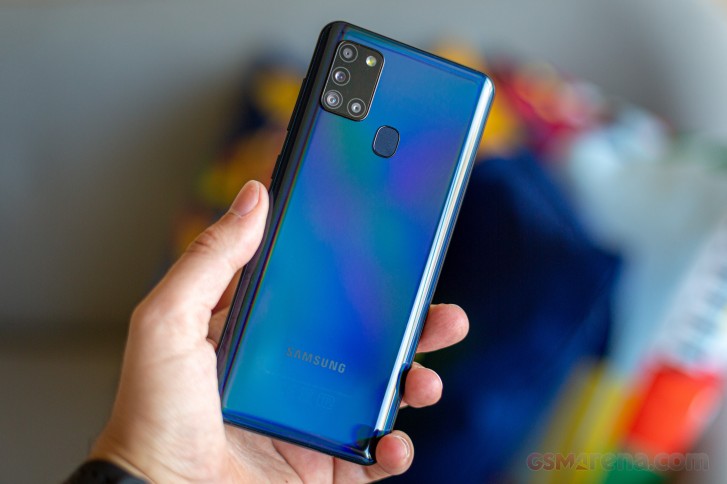 The quad-camera setup and the LED flash are on the back of the A21s, separated within a black rectangle. It is protruding just a tiny bit and thus will not make the phone wobble on your desk, not a lot at least. 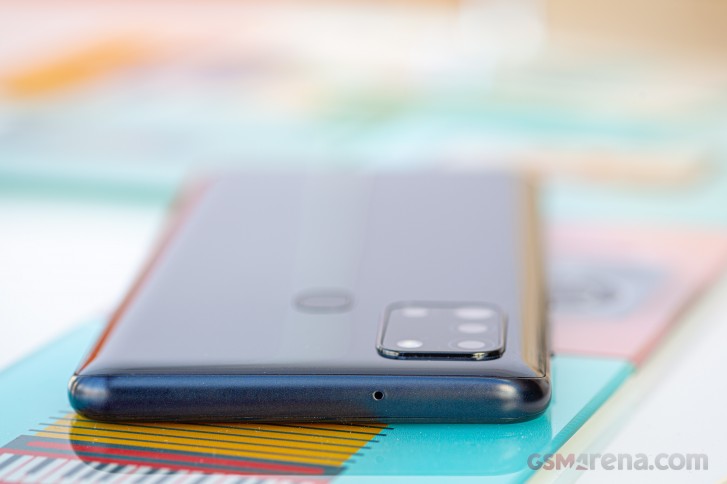 So, this black rectangle accommodates the 48MP primary cam, the 8MP ultrawide shooter, the 2MP macro snapper, and the 2MP depth sensor. A single-LED flash is here, too. 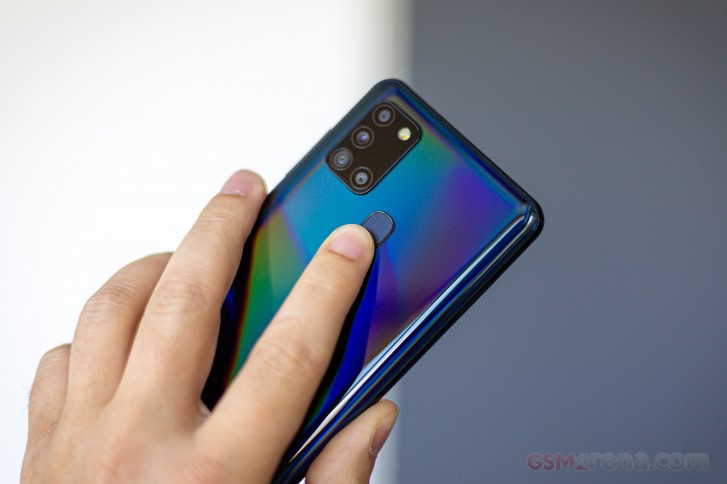 The fingerprint scanner is also on the back of the Galaxy A21s. It is always-on and impresses with speed and responsiveness. Registering fingerprints requires a few swipes, but you unlock it by simply tapping on it - no swipes needed.

The Galaxy A21s is no small phone, but it can't be with that 6.5" display. It is rather thin, though, and very easy to work with, especially with all the One UI improvements towards single-handed operations. Handling is okay, and the grip is mostly secure. 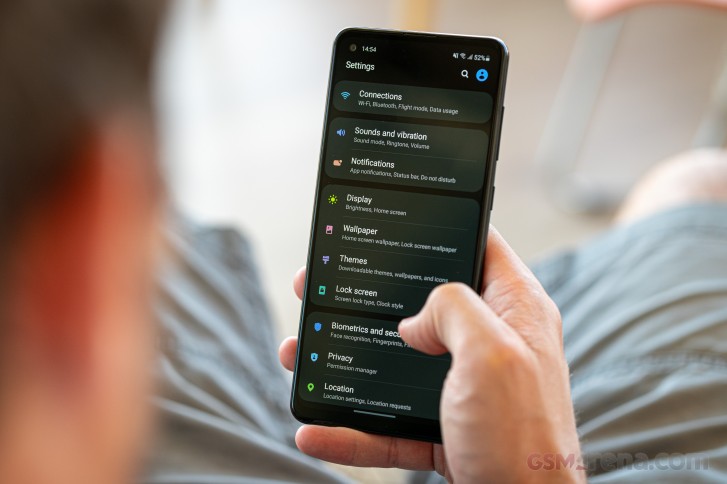 The phone lacks any sort of water resistance - there is no repellent coating or rubber seals around the ports. Such treatment has been spreading lately among Samsung's competitors, and we hope to see on the A series rather soon, too.