The Galaxy A22 is the LTE sibling to the Galaxy A22 5G, which we already reviewed a few months back. The duo was actually announced together back in June, but we didn't get around to reviewing the LTE variant until now.

The Galaxy A22 LTE a budget phone that does have its merits such as a fast 90Hz AMOLED display, a versatile quad-camera setup and a big 5,000mAh battery. That's a solid foundation, even if not quite on the same level as some of its higher-numbered siblings.

Samsung has been investing big in its sprawling Galaxy A family of devices, particularly since the kick-off of the "Awesome is for everyone" campaign back in March and the unveiling of the Galaxy A52, A52 5G and A72 and the introduction of the Galaxy A32 a bit before that. The Galaxy A22 sits a bit further down in the pecking order but does still get many "trickle-down" benefits that come with the Galaxy A moniker.

Samsung Galaxy A22 specs at a glance:

Sharing key specs with the Galaxy A32 LTE doesn't work in favor of the A22 LTE, especially since they both retail for about the same price.

Firing up a quick side-by-side comparison of the trio quickly reveals the Galaxy A22 and Galaxy A32 essentially trade blows spec for spec. All three models can be purchased for about EUR 250. Which does raise the uncomfortable question - does the Galaxy A22 have its own place in Samsung's portfolio?

Of course, the choice could all come down to a particular regional deal you happen to find when choosing between the A22 and A32. There are some details on their specs sheet that could potentially also tip your own personal preference one way or the other.

As for the comparison to the Galaxy A22 5G, the choice of the better phone is thankfully much clearer and easy to follow. Samsung essentially took the usual approach of implementing 5G into a model without increasing the price point. This, of course, meant it came at the expense of cutting down the rest of the phone's specs until the total package - now with 5G - fits into essentially the same budget. Not a terrible approach by any means, but if 5G is indeed high up on your list of priorities, it makes for an interesting decision. You get some and you lose some like with everything else in life.

We'll know the full picture once we learn more about what the Galaxy A22 LTE is capable of.

Samsung has been doing this sparing "sleeve" kind of packaging for its more affordable models for some time now, and while it seems to do the job well enough, we can't say we are fans. The top cardboard layer is just too thin and flimsy, and there is nothing protecting the phone that sits underneath if something presses on it. Then again, it is arguably a more ecological approach to packaging. Still, we believe that a good middle ground can be struck better. 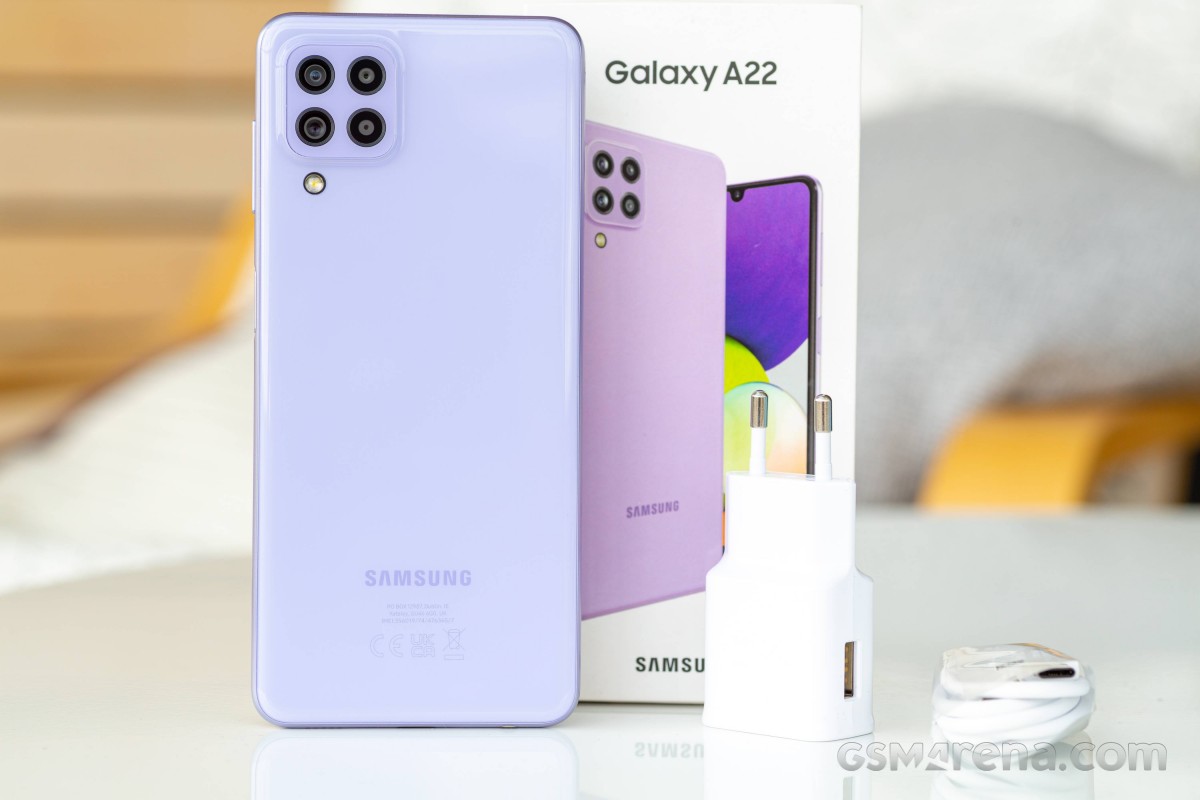 In terms of accessories, our unit just came with a rather short white USB Type-A to Type-C cable and a wall charger. The latter is one of Samsung's basic Adaptive Fast Charging units, rated for up to 9V@1.67A (15W). Nothing fancy, but still decent for a budget device. The USB cable is also wired for data, which we guess is something.

You get no added value extras in the box, no screen protector, case or buds. This is one area Samsung has cut back in and never looked back. We get it. Even with all three bonus items tossed in the box, the user probably gets about $10 worth of extras at most. Still, competitors like Xiaomi and Realme often include some bonus items and improve the initial experience. Samsung isn't quite as competitive in this aspect, whether you personally care or not.

Actually there are several factors: One, They might be comfortable with One UI and like the Samsung A22 because it is a bit light compared to Poco X3 Pro (probably)