Samsung Galaxy A2 Core specs leak: a tiny phone with a 5" screen and Android Go

The Samsung Galaxy A2 Core leaks have reached their peak as the phones user manual has surfaced alongside the complete specs for the phone. This is an affordable Android Go device, so dont expect anything cutting edge. 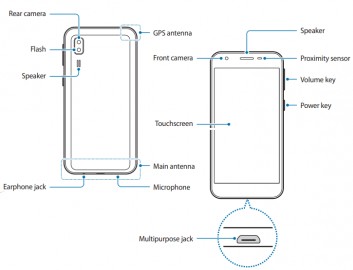 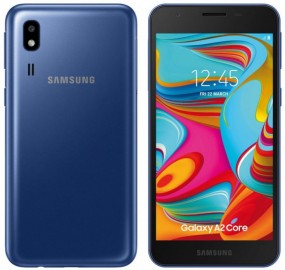 Samsung Galaxy A2 Core: schematic from the manual  leaked image

The phone sports a 5MP camera on the back (1.12µm pixels, f/1.9 aperture) as well as an unspecified selfie camera.

The Samsung Galaxy A2 Core will run Android 8.1 Oreo Go edition on an Exynos 7870 chipset with 1GB of RAM. The dual SIM models will have a dedicated slot for the microSD card.

On the connectivity side, there's microUSB, a 3.5mm audio jack (with FM radio support), Wi-Fi at 2.4GHz, Bluetooth 4.2. Whats missing is HD Voice and NFC.

There will be an A-series event on April 10, but the Galaxy A2 Core is pretty low profile and may be unveiled quietly without much fuss.

I understand why so many people complaint about recent phones sizes... I still miss my old LG G2 mini in terms of size. But this one is not a huge one so the rambling is really out of proportion (and saddly won´t be taken seriusly by phone deve...

Look like something from 2014. I say it would sell at $40 only. Doesn't look worth more than that.