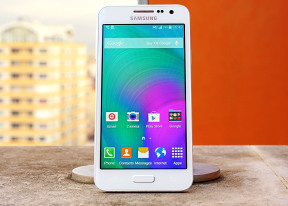 It's not like Samsung has never designed beautiful, metal phones. It's just that most of those came before the Android era. Samsung wasn't afraid to experiment with materials back then. Remember, the Samsung S8500 Wave?

Well, change is in the air and after the Galaxy Alpha and the Galaxy Note 4, Samsung is making the next step by re-imagining the design of its mid-range devices.

All the phones in the Galaxy A lineup share the metal frame along the sides, which has beautifully machined, shiny metal edges.

Samsung Galaxy A3 features a 0.2" smaller display than the Alpha, which has resulted in the phone having an overall smaller footprint - 130 x 65.5 x 6.9 mm and 110 g. That's 2.3 mm shorter, 0.2mm thicker and 5g lighter than the original Galaxy Alpha. Here are few shots sizing up the two.

Samsung Galaxy A3 sized up to the Galaxy Alpha

Aside from the white metal frame, the Galaxy A3 also uses metal as a trim to the camera lens, the loudspeaker, the power key and the volume rocker. The non-removable rear cover is made out of solid matte plastic with a smooth surface, which glistens as light falls on it. In fact this finish reminds us of how a pearl would glisten under light. The impression is so strong that it adds a sort of a feminine feel to the white smartphone.

That aside, handling the Galaxy A3 is a real pleasure - the phone is impressively thin and light, the build quality is great and the matte rear cover provides a solid grip. The Galaxy A3 would easily fit even in a tight shirt pocket and it's so light that you may altogether forget that it's there.

Handling the Galaxy A3

A key feature to the Samsung Galaxy A3 is its 4.5" Super AMOLED screen of qHD resolution. That's 540 x 960 pixels or 245ppi density. Such pixel density may not be of (what's known as) Retina grade (generally, above 320ppi), but it's OK for the market segment it would occupy.

Since this is a Super AMOLED unit, it delivers punchy colors, unmatched contrast and great viewing angles, and it's clearly legible outdoors. The Samsung Galaxy A3 also offers a number of screen presets to adjust the screen colors to your liking.

Above the display we find an earpiece, the usual bunch of sensors and a high-resolution 5MP selfie snapper.

There is nothing unusual below the screen either. A hardware Home key is flanked by a touch-sensitive App switcher key and a Back key.

Unlike the Alpha, the Galaxy A3 doesn't offer a finger-print sensor under the Home button, nor is there a heart-rate monitor on the back.

The traditional face of a Galaxy smartphone

The metal sides of the phone host a single hardware control each - the Power button on the right and the Volume rocker on the left. Both are made of metal. They are slightly too slim for our liking, as that makes pressing them harder.

The hardware controls: the volume rocker on the right and the power/lock key in the left

The microSD and nanoSIM trays are on the right-hand side, easily ejectable with the provided metal pin.

In contrast, the original Galaxy Alpha smartphone didn't offer a microSD storage expansion, but it did allow you to access and remove the battery.

The microSD and nanoSIM trays are on the right

The top of the phone features only the secondary microphone, which is used for ambient noise cancellation in calls.

The bottom is more crowded, accommodating the exposed 3.5mm audio jack, the microUSB port and the primary mic pinhole.

The top and bottom of the Galaxy A3

The 8MP camera is on the back, accompanied by a rather big LED flash. The camera itself protrudes slightly from the back of the phone, extending past the 6.9mm thickness. The snapper is also capable of recording 1080p videos.

Out of reach, below the back panel, is hidden a 1,900mAh battery. Unfortunately, it's not user accessible.

Unfortunately, we can't post sample images and videos from this one as the unit we have here is an early pre-production device.

We would have to wait for a proper review unit until we measure the chipset performance, check the camera image quality and do the whole battery of tests we usually do in our full-featured reviews.

The Samsung Galaxy A3 comes loaded with wireless connectivity features. It starts with LTE Cat. 4 (up to 150Mpbs down, 50Mbps up), while regular 2G and 3G connectivity is, of course, supported, too.

There is also support for Bluetooth 4.0 LE and ANT+, the latter aloowing for easier connection to certain wireless sports accessories.

The Galaxy A3 relies on a standard microUSB 2.0 port for charging and wired data connectivity. Having only 2.0 is fine as USB 3.0 ports are rare and require a fairly large female jack on the side of the phone - not the prettiest of sights on an ultra slim phone.

What we do miss here is a wired TV-out option either via MHL or SlimPort.