Navigating Samsung's sprawling device lineup in 2020 is no easy task. The Korean giant is hardly the root of the problem but is still part of the trend. Through a combination of factors and processes, we currently have a potent smartphone market where both model volume and turn-over are at an all-time high. That's especially true for the budget and mid-ranger space, which is precisely where the Galaxy A31 positions itself.

It is one of Samsung's cheaper entry points into the sought-after Super AMOLED display tech, giving it a neck up ahead of siblings like the Galaxy A11 and A21s. The confusion starts to settle in once you look further up the Galaxy A device lineup, though. Particularly the Galaxy A41, which the A31 manages to outpace with a longer 6.4-inch screen diagonal and a larger 5,000 mAh battery. An odd choice, for sure, especially since the A41 is a bit more expensive in stores than the A31.

Things get weirder still when the Galaxy M family comes into play. The Galaxy M21 offers the same 6.4-inch Super AMOLED display, paired with a bigger 6,000 mAh battery and a slightly different chipset. The in-house Exynos 9611 might be lacking behind the A31's MediaTek P65 in raw performance, but it is made on a more-efficient 10nm manufacturing node and impressively manages to squeeze 4K video recording and gyro-based EIS from a nearly identical main camera setup. To get the same kind of video capture versatility from a Galaxy A series device, you have to look at the more expensive Galaxy A51, which relies on the Exynos 9611 chipset, just like the Galaxy M21 and has a smaller 4,000 mAh battery. 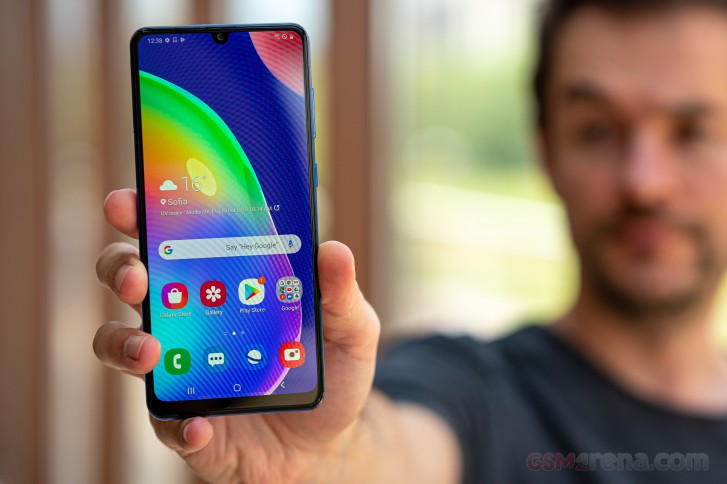 Confusion seems to be the most appropriate response to all this. To be fair, not all of the Galaxy A and Galaxy M models are universally available across all markets, even if there is often a big overlap. This helps when trying to navigate the sea of choices.

On another positive note - the Galaxy A31 which we are looking at today, still manages to stand-out among its Galaxy A siblings as a high-value offer. One that combines the inky blacks of a Super AMOLED panel with a 5,000 mAh battery - the largest in the lineup. The Galaxy A51 has it beat with 4K video capture, EIS and higher resolution 12MP ultrawide camera but if none of these is particularly high on your wish list, the Galaxy A31 remains the most sensible choice from the lot.

Being part of the relatively more-premium Galaxy A family still has its perks, here and there, like a richer accessory package. Our base configuration 64GB, plus 4GB Galaxy A31 review unit shipped with a solid, even if basic pair of GH59-15055A earbuds, with an in-line microphone and volume controls. Also, a standard 15W Adaptive Fast Charging wall adapter and a Type-A to Type-C USB cable. Last, but not least, we find a soft, yet thick and sturdy, transparent plastic case. So out-of-the-box you've got everything you need to get you up and running. 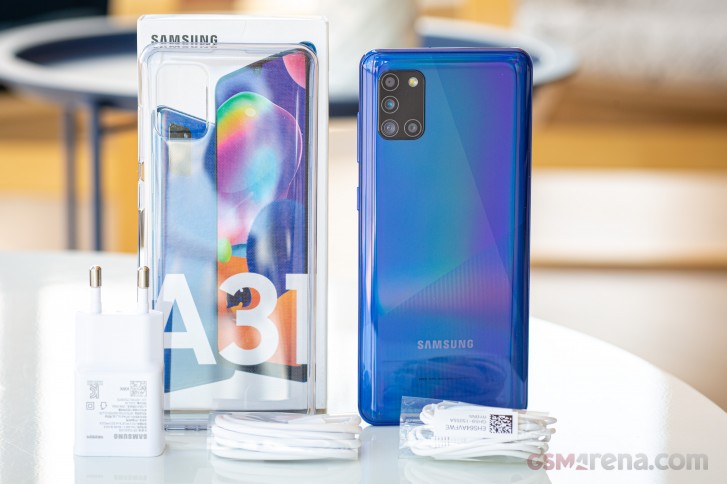 The box itself is nothing special. Cost-savings are apparent, with a sleeve in place of a top cover piece and no plastic cradles or dividers on the inside. Still, the outer material is tick and perfectly adequate enough to serve its purpose and protect the Galaxy A31 in transit.

Ilove the quality of this phone including the superb specs and design. One thing i notice is design of camera itself. Not like the other Aseries of samsung thats look cool when you see the back design. Above all,its all good. The android12 update als...