All Galaxy A phones have always had one thing in common and that's the Super AMOLED screen. The A50 isn't a combo breaker either and it also packs a large 6.4" Super AMOLED screen of 1080p+ resolution. The actual pixel count is 2,340 x 1,080 making the aspect ratio quite wide at 19.5:9 and the pixel density is more than enough at 403ppi. The A50 features the so-called Infinity-U panel, meaning it has a U-shaped notch at the top for the selfie camera. Samsung was one of the few makers to stay away as long as possible from the screen cutouts but eventually it caved in. We guess this makes Sony the last defender of the notch-free screens.

Anyway, notch or not, the Super AMOLED screen is of the usual high-quality we've grown to like. We measured about 420 nits of maximum brightness in manual mode and 550nits in auto with the ambient light sensor is exposed to bright light. We measured a minimum brightness of 1.8nits - pretty great result.

As we've come to expect from Samsung Super AMOLEDs, the display on the Galaxy A50 is capable of accurately reproducing different color spaces depending on content and selected display mode. The Basic mode stays true to sRGB (average DeltaE of 1.7), AMOLED Photo is for Adobe RGB applications (average DeltaE of 1.8), while AMOLED Cinema adheres to the DCI-P3 color space (average DeltaE of 2.0). Of course, the default Adaptive mode makes no claims for accuracy and posts an average DeltaE of 3.3 against a DCI-P3 target with a maximum deviation of 8.8.

The Galaxy A50 has a large 4,000mAh battery inside, quite like them Redmi Notes. It supports 15W charging but we didn't get a retail box so we can't provide you with any charging stats.

In our testing, the Galaxy A50 achieved more than respectable results. We clocked north of 12 hours on our Wi-Fi web browsing script and almost 16 hours of looping videos in airplane mode. The 3G talk time is over a day - an excellent score as well.

Adding to the mix the excellent standby performance the Galaxy A50 posted an overall Endurance rating of 98h. And we now know what to expect from any future Exynos 9610-powered smartphone. 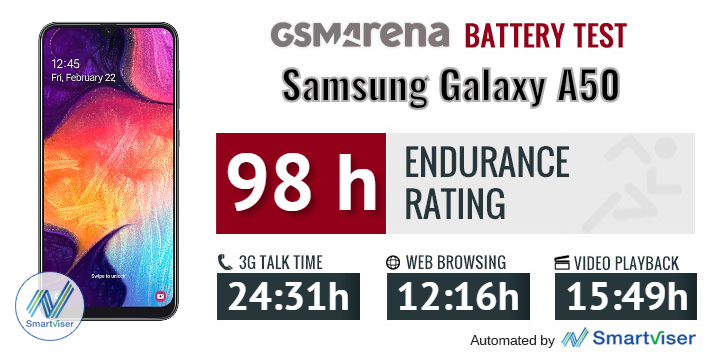 Our battery tests were automated thanks to SmartViser, using its viSer App. The endurance rating above denotes how long a single battery charge will last you if you use the Samsung Galaxy A50 for an hour each of telephony, web browsing, and video playback daily. We've established this usage pattern so that our battery results are comparable across devices in the most common day-to-day tasks. The battery testing procedure is described in detail in case you're interested in the nitty-gritty. You can check out our complete battery test table, where you can see how all of the smartphones we've tested will compare under your own typical use.

The Galaxy A50 has a single loudspeaker located on the bottom. It scored a 'Very Good' mark in our three-pronged test when it comes to loudness, but the good news stops here. The output is rather poor and lacks big time in the high frequency. So, as far as quality is concerned - the A50 has a loud sound, but not that clean or rich.

The Samsung Galaxy A50 delivered a stellar performance when tested with an external amplifier with high volume levels and perfect clarity marks.

Hеadphones markedly degraded the reproduction accuracy - some intermodulation distortion crept in while stereo crosstalk shot up markedly. The harmonic distortion reading was also a bit worse than usual, adding up to output that's average at best. On the upside the loudness was just as high as in the first part of the test and certainly among the best in the mid-range market.