Samsung officially announced two new midrangers, called Galaxy A50 and Galaxy A30. They come with Infinity-U displays, 4,000 mAh battery and a so-called “3D Glasstic” design on the back. Both of them have a fingerprint scanner, but the A50 has it under the screen, while the A30 comes with the sensor mounted on the back.

Samsung Galaxy A50 in Black, Blue, Coral, and White

The official specs confirm a leak we found two weeks ago - Exynos 9610 chipset and a 6.4” Super AMOLED screen with Full HD+ resolution for the Galaxy A50. The Galaxy A30 comes with the same display and footprint, but runs on Exynos 7885 with two main Cortex-A73 cores and six energy-efficient Cortex-A53 at 1.6 GHz.

The Galaxy A50 has a vertical triple camera setup - 25 MP f/1.7, coupled with a 5 MP f/2.2 depth sensor. There is also an 8 MP ultra wide-angle shooter. The front-facing camera is also 25 MP, but with an f/2.0 aperture. The Galaxy A30 received a complete downgrade in the camera department - dual 16 MP + 5 MP setup, the second having wide-angle lens, while the selfie snapper is 16 MP as well, but with a brighter aperture. 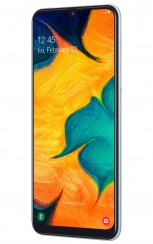 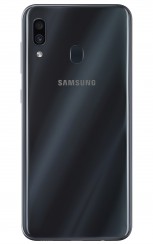 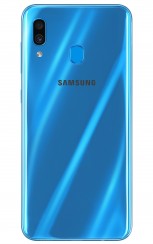 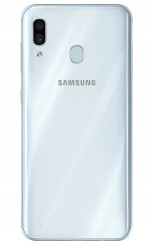 Samsung Galaxy A50 will arrive in four “characterful” color options - Black, White, Blue, and Coral. The Galaxy A30 will miss the last option that looks anywhere between Pink and Orange, depending on lighting and personal perception. The Korean manufacturer calls the design “3D Glasstic” which is a portmanteau from glass and plastic.

Pricing and availability are yet to be announced, but we are at MWC 2019 and we’ll try to get more info from Samsung officials at the company booth.

Many of us want smaller and lighter phones. I’ve upgraded from iPhone 7 to Xr, But I’m returning to the 7. My other phone is Galaxy S7. I’ll keep it till it breaks.

Is the a50 coming to South Africa?