Samsung has released a new software update for the Galaxy A50 in India which brings in the June 2019 security patch to the phone.

This new firmware requires a 422MB download and sports version number A505FDDU2ASF2. And, while the changelog only mentions improvements to the stability of Knox Guard and security of the device, a user has reported that this build also brings in new camera features to the Galaxy A50 like Night Mode and Super Slo-Mo video recording. 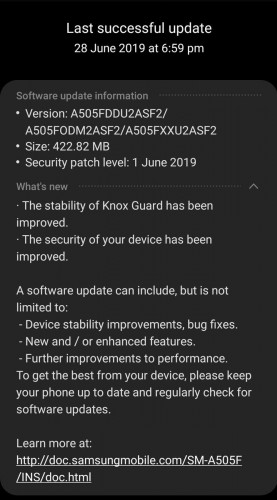 However, these features aren't automatically accessible and you have to reset the camera settings to use them.

Additionally, this update also adds the ability to scan QR codes from the camera app without Bixby Vision.

This firmware is rolling out over-the-air and you can head over to your phone's Settings > Software update menu to try pulling it manually if you haven't received a notification yet.

I tried the slo-mo in my living room and it was poor, You won't get quality using it indoors, try using outdoors like I did in better lighting condition and you will get good quality.

I didn't get an OTA message directly on my phone but got info via my laptop's Smart switch app, it wasn't 422mb as the article states, but over 3GB. Though my A50's camera got the night mode, & super slo-mo after I did the smart switch update via...

I am from Pakistan and i didn't recieved any information about software update why is that?