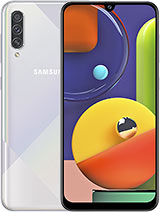 What's the difference between a50s and others M series like M30s,M21, M31? They're all use same soc and i'm not see many difference and the prices are different. Feel regret bought this phone

AKA, 24 Mar 2020Guys pls school me, which is one is bigger btn Octa-core and Hex :-)? Because in my mind Octa ... moreHexa means 6, and yes 8 is bigger than 6. But octa core doesn't necessarily mean it's better than hexa core. U have to take into account the power of each core, or what the total combination of the cores add up to.

Mediatek for instance on their helio p22 have all 8 cores at 2ghz. No lower end or turbo end. Qualcomm on their snapdragon 820 have quad core - 4 cores with 2 turbo cores at 2.2 and low end cores at 1.6. In this instance, power demanding games tend to play better on the snapdragon because of the turbo cores. But normal usage run better on the mediatek because of the 8 2.0 cores compared to the 2 1.6 cores.

But also the make of the cores also come into play. Kryo cores are better than cortex cores and kryo gold are very very good.

I've read about this a few times as I've gotten interested in what's under the hood of phones (so to speak) of late.

Guys pls school me, which is one is bigger btn Octa-core and Hex :-)? Because in my mind Octa means eight and hex = 5
Besides that, i think Samsung did a wonderful job on this fone..plus I hope that it is durable against unintentional droppings.

Pal, 17 Mar 2020Poor camera and camera quality elNope. I use samsung a50s. Check out for the pics I took with samsung a50s.I will never lie. Samsung did a good job for this model.

Anonymous, 21 Mar 2020Either one is good. I'm using an a50s with a 6/128 GB version and it hasn't disappointed me yet.Same here. In fact it perform so much better. A good phone from it's range. I love the camera. Overall i thank samsung for this good phone.

6gb/128 Exynos 9611 processor is not good one week usage the phone is lagging its not too smart to snapdragon processor in feature need to improve . Instead of using ocate core they can use hex core to improve more performances........

Considering only processor speed and less lagging in device which one is better? A50s or M31? Also does A50s has signal reception issues?

Every phone that I want to buy A50s, A51 I get too many negative comments. So what should I do? I thought Samsung A51 or A50s would be good for me

domraym, 21 Feb 2020I bought this for my dad despite my objections because he insisted on a Samsung for familiarit... moreAre you sure you have bought A50s It might be A50. A50s is improved battery version of A50

Is this phone have good antenna quality?

Bastigonzales, 19 Feb 2020This phone is good for its price especially Android 10 and One UI 2.0 is coming on April. I on... moreBut I am satisfied with the battery life....

Heisenberg, 05 Mar 2020Why does this phone has mixed reviews? Some people say it has bad battery life and some say it... moreI bought this one just becoz of samsung pay and nfc...
Otherwise, if u can sacrifice these things definitely m30s and m31 are the best ones available ryt now

I am able to record 4k from the front camera...
How's that possible?

The fingerprint sensor is very slow and you need to place your finger to the correct spot before unlocking. The face recognition is slow as snail as well.

Why does this phone has mixed reviews? Some people say it has bad battery life and some say it's good. I also want to know the speaker quality, is it better than M30s or M31?