Samsung is clearly on a roll when it comes to OneUI 2.0 and Android 10. Of course, we can't exactly confirm or expect that every device will receive the major update ahead of the originally posted schedule, but a pattern definitely seems to be forming. The Galaxy M20 and M30 started getting the OTA in India back in December and a few days ago, the Galaxy M30s was spotted getting a new Wi-Fi certification on Android 10. 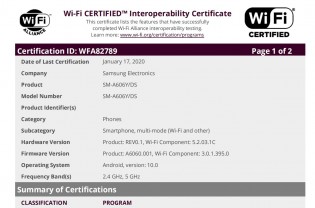 The situation seems to be absolutely identical with the Galaxy A60 and M40. The former was scheduled for an April 2020 Android 10 update, while the latter had it better with an expected window of March 2020. A bit odd, considering the pair are pretty much identical in terms of hardware. We can only assume the certification and legal hassles outweigh the software effort at this point in time. Anyway, both of these devices were also spotted revisiting the Wi-Fi Alliance for some paperwork, while rocking Android 10. Typically a Wi-Fi certification signifies an imminent release or, in this case, OTA update. M40 is just a name change for certain markets.

S8 and Note 8 already got two major updates and that's it. No third major update with OneUI 2.0.