Samsung Galaxy A6 and A6+ spotted at Geekbench

Samsung’s A-series spans the range of smartphone sizes from big to small, but it has gaps – there’s an A5 and an A7, but no A6. Or is there? A Samsung SM-A600FN and an SM-A605G showed up on Geekbench.

If they follow Samsung’s typical naming convention, they will be the Galaxy A6 and Galaxy A6+ (hopefully with a year attached, to keep things consistent). It’s not a given, though, the Galaxy A8 (2018) is A530. 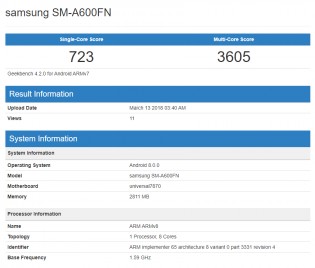 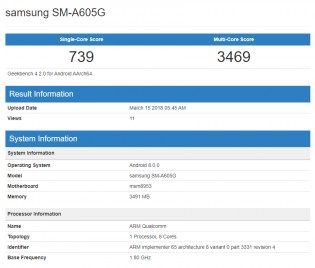 Just like the recent Galaxy J8 leak, the Galaxy A6+ model uses a Snapdragon 625 instead (same CPU, Adreno 506 GPU). The Plus model has more RAM too – 4GB instead of 3GB. Both models run Android 8.0 Oreo (hurrah for Trebble).

As with the J8 and J8+, the performance of both chipsets was identical. It’s just a matter of having the right modem for the region (FN should be the global version, G is likely South America and parts of Asia). Don’t worry, there should be a Plus version of the global model too, though the availability may be more limited compared to the non-Plus model.

Unlike the J8 phones, the new A-series models should come with an infinity display (the A8s do). We never got an S7 mini (or S8 or S9 mini), but a Galaxy A6 could come close.

Thanks for the tip, Michel