Samsung's transitioning its A-series from odd to even numbers for this year, and that's so far brought us the Galaxy A8 (2018) and the A8+ (2018). An A6 and possibly an A6+ are on the way also, as evidenced by a couple of earlier GeekBench listings, and now we have a new episode in the A6's development.

A Samsung device with a product code SM-A600FN, which we speculate to be the A6, has received Wi-Fi certification from the Wi-Fi Alliance. That would be the same SM-A600FN model from the benchmark database, though we're yet to see confirmation on the actual name it will have for the masses. 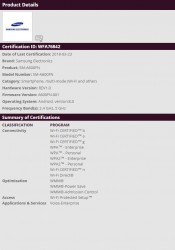 The certification doesn't tell much, other than confirm that the phone will run Android 8.0 - already outed on Geekbench. Oh, and that this potential A6 will support Wi-Fi a/b/g/n, but not ac - a little odd given that we've seen Samsungs with the same Exynos 7870 chip that do support the standard. Oh, well.

As long it's pocketable. And 1h usable. That colleague is fine. She nearly went to get an iPhone SE, but I tried to pull her to Android. I gave her the opportunity of messing with XZ1C and she didn't like the experience much. The UI is great but the ...