The original Alpha project wanted no ties with the Galaxy line - which has been all over the place, from entry-level to premium. After a welcome identity boost, the A-series returns home. The Galaxy A7 is at the helm, a slim, light, metal-trimmed phablet to offer an alternative to the Galaxy Note 4 and other premium phablets. 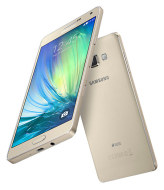 The A7 is a mere 6.3mm thick and has a metal frame, which gives the tall device a welcome degree of rigidity. At 35g lighter than the Note 4, this phablet feels smaller in the hand even though the height and width are very close.

Like its fellow Samsung flagships, the Galaxy A7 has a Super AMOLED screen, 5.5" big with 1080p resolution. It's powered by either an Exynos 5430 (like the Galaxy Alpha) or a 64-bit Snapdragon 615. In either case you get a 13MP main camera and a 5MP selfie camera.

We're testing the dual-SIM version powered by Snapdragon 615. It has 16GB of built-in storage, which you can expand if you're willing to give up the second SIM slot - it's one of the combo slots that have gained popularity lately. We would have preferred three slots, but this setup still affords a reasonable degree of flexibility.

Last season, the Galaxy Note 3 Neo was the low-cost alternative to the then flagship, but this year there's no Note 4 Neo. The Galaxy A7 takes that role in a way, but while it is indeed cheaper than the Note 4 we wouldn't call it "low-cost." It has a premium build and comes with a matching price tag.

The slender Samsung Galaxy A7 at our office

The break from the established Galaxy S and Note series is also a chance to start fresh. Granted, Samsung stayed close to its main product line in terms of looks, but the Galaxy A series prioritizes design over features. Not something we thought we'd say about a Samsung just a year ago.

What in gods name were they thing. Shoot the developers or anyone involved in placing this A7 tab on the market! I guess they never tried to actually use the A7 tablet. Its like a maze, You should be able to setup the tablet by going to the Sett...

It has a finger print sensor at home screen