Samsung Galaxy A7 gets closer to launch after FCC visit

The Samsung Galaxy A5 is currently on sale in China and the Galaxy A3 soon to follow, but the top of the line Galaxy A7 is yet to come out. The phone's visit to the FCC is a strong indication that this will happen sooner than later. 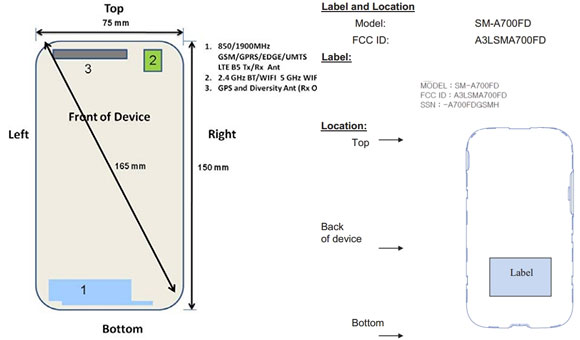 In the process, the specs of the Galaxy A7 were also revealed. They are align nicely with the the ones leaked in the end of October.

The phone is built around a 5.2" display of 1080p resolution and is powered by the Snapdragon 615 chipset with 64-bit 1.5GHz octa-core CPU and 2GB of RAM. Internal storage is 16GB, but there's no information if there's a microSD card slot on board yet.

The main camera is expected to be a 12 MP unit with Full HD video recording, while the selfie snapper will top out at 5 MP. The phone will also have an accelerometer, Bluetooth, a compass, GPS, NFC, and Wi-Fi.

Here's hoping the phone launches by the end of the year. Pricing and official information regarding availability are unavailable at the moment, though.

samsung doesnt compete the market, they create the market... eg. the note series, followed by all, including the jokers who once laughed n now made their own plus(+)

wow this will be almost the same size as a note 3?