Samsung Galaxy A8 spotted in brochure in South Korea

The Samsung Galaxy A8 still hasn’t graduated to official status, but it's not far now. One of our readers spotted the unofficial phone in a brochure and sent us a snap (thanks!). The specs confirm the slender 5.9mm thickness and the 16MP camera with a Galaxy S6-like f/1.9 aperture (no word on video resolution). 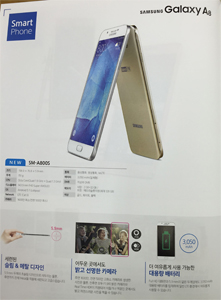 Additional specs include LTE Cat. 6 with VoLTE, DMB (common in Korea, less so otherwise) and a 3,050mAh battery. What's not visible in the brochure is the price and launch date. The Samsung Galaxy A8 has leaked before, on video and hands-on photos if you're curious for more info.

Thanks, Sung Kim, for the photo!

Sounds like Exynos 5430 which is much better than SD615. Seems like some markets going to get it with Exynos while others got Snapdragon. Since A7 in my country came with Exynos 5430 out of box thats too probably will be same. So far its pr...

I think Samsung A series will be low-mid range phones... Octa-Core crap called SD 610 is useless for multimedia but good for as calculator.