The latest and probably most high-end, if numbers are anything to go by, addition to the Galaxy A line should be arriving shortly. After a quick stop over at Geekbench last month, the Galaxy A90 was then certified by the Wi-Fi alliance. Now the phone was spotted getting greenlit from the Bluetooth Special Interest Group (SIG) as well, hinting at an imminent launch. 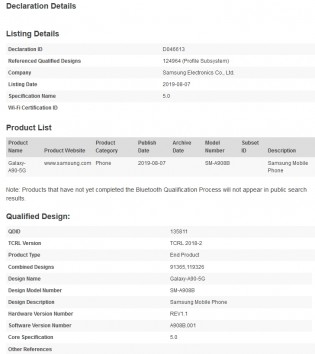 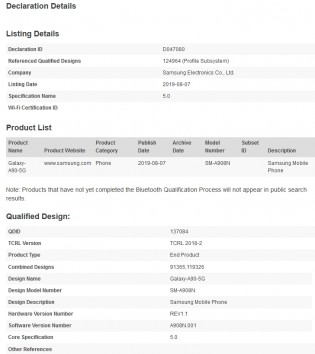 Probably the more interesting bit, though, is the fact that two distinct variants of the Galaxy A90 are listed on the Bluetooth SIG site - SM-A908N and SM-A908B. Coincidentally, the latter number matches the Wi-Fi alliance document we reported on earlier, giving more credibility to the info that a 5G and regular 4G version of the A90 will, indeed, exist. Unfortunately, beyond that and the fact that the phones will have Bluetooth 5.0, the new certificates offer little info.

As far as we currently know, the Galaxy A90 will be based around the Snapdragon 855 chipset, along with 6GB of RAM. This likely goes for both the 5G and the 4G variant, although there could be some slight differences in RAM and storage between the two as well. In fact, rumors currently hint at different cameras for the two variants, with 5G allegedly getting a 48 MP + 12 MP + 5 MP setup and its 4G sibling - a 48MP+8MP+5MP array. Again, not too much of a major difference. Beyond this, both phones are expected to pack hefty 4,400 mAh batteries and use the same 6.7-inch Infinity-U Super AMOLED displays with FHD+ resolutions. Hence, the earlier rumors of a Galaxy A80-style motorized selfie camera appears to be put to rest.

Yes it could be that the s10e is a better deal, but remember s10e is very small and most of us are use to big phones so its kind a difficult there, it all comes down to preferences.

Honestly, the S10e is a better option in case anyone thinking this A90 is actually budget worthy phone with flagship chipset. You are in for a bad surprise.

*sees headphone jack on the case leak* Don't do that. Don't give me hope.