There are no surprises in the Galaxy Ace 2's retail package. The phone comes with just a compact charger, a microUSB cable and an unusually designed headset with a single button remote.

The Samsung Galaxy Ace 2 resembles a compact Galaxy S, which helps brand identity (the original Ace looked a lot like a certain very popular competitor). The phone remains relatively compact, despite the increase in screen size.

Above the display, there is the proximity sensor, but no ambient light sensor. The new addition here, compared to the original Ace, is a front-facing VGA camera.

Below the display there's an arrangement of three keys, in what's become the trademark Samsung layout. There's a hardware Home key in the middle, with two capacitive buttons on either side - Menu and Back. There's a dedicated setting for the duration of the capacitive key backlighting, and you can even have it always on. But there's no way to enable vibration on press - the entire screen has haptics disabled - just like on entry level handsets like the Galaxy Y and the Galaxy Fit.

On the left side of the Samsung Galaxy Ace 2 I8160 you get, top to bottom, the lanyard eyelet, volume rocker and a microSD card slot, under a plastic flap. The card slot handles cards of up to 32GB, so you can have plenty of storage even when the built-in 4GB run out. You'd have to get your won card though, there isn't one in the box.

The Power/Lock key is on the right (again, typical Samsung), which makes it accessible with both the right-hand thumb or the left-hand index finger, depending on which hand you're holding the phone with. Some users would still rather have this button at the top though.

On the top side of the phone is the 3.5mm standard audio jack, as well as the small crevice for removing the back panel. The bottom of the phone features the USB port and the mic pinhole. The microUSB port is used for both data and charging.

The 3.5mm jack is on top • The microUSB port located on the bottom

The back of the Samsung Galaxy Ace 2 is almost completely flat with a very subtle diamond pattern. The plastic feels nice to the touch and takes almost no fingerprints, but hasn't got any sort of premium feel to it.

Around back, the 5MP camera lens is centrally placed near the top, along with the LED flash. Just like in the original Ace, the lens is exposed and vulnerable to scratches so you'll have to take care not to damage it.

The back also features the loudspeaker grille, which has a small nub to make sure the sound doesn't get muffled when you place the phone down on a level surface.

Our dedicated battery test found the Samsung Galaxy Ace 2 I8160 to be a pretty long-lasting device, the smartphone getting an endurance rating of 43h. That's exactly as much as the Galaxy S III did and slightly better than the Galaxy S II. 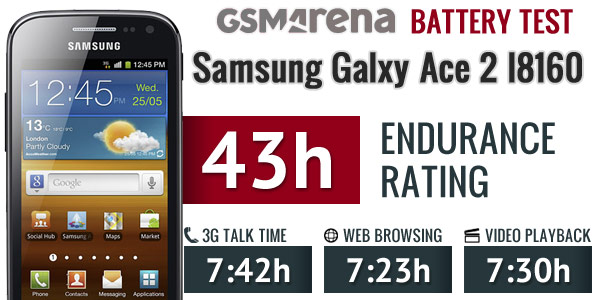 You can find more information on our battery testing routines over here.

Speaking of the screen, it's a very good unit and a major improvement over what the Galaxy Ace had. It's a PLS LCD unit with a 3.8" diagonal. The resolution has been more than doubled and is now WVGA (480 x 800) at 246ppi pixel density.

Samsung Galaxy Ace 2 has a great screen for the class

The image looks sharp, with reasonably good viewing angles and pleasant colors. The brightness could've been better though and the screen is rather reflective, meaning sunlight legibility is less than stellar.

We put the Samsung Galaxy Ace 2 through our usual display tests and we are now giving you its results. You can find more about the testing procedures here.

We zoomed into the display using our digital microscope so you can get a better idea of how the pixels are arranged, and how big they are. As you can see the pixels are slightly bigger than those of the Xperia U, which suggests slightly lower perceivable sharpness. 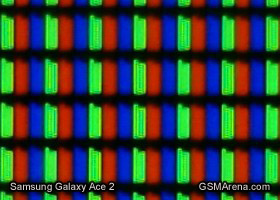 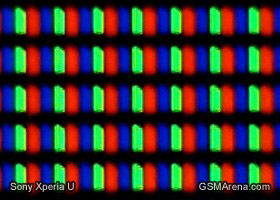 The Samsung Galaxy Ace 2 I8160 is solidly built and since it has no chin or hump, the phone slides into pockets easily. The Ace 2 is a bit on the wide side at 62.2mm but it's quite comfortable to hold.

We have no gripes with the handling and usability of the phone, the one complaint we do have is the phone's plain plasticky aesthetics.

This concludes the hardware part and we're ready to move on to software. With Android 2.3 and TouchWiz 4.0 we don't expect any surprises there. Value for money phones like the Ace 2 aren't supposed to surprise, as long as the functionality is up to standard.