Retail package: as basic as it gets

The retail package revealed nothing extraordinary in terms of accessories to the Galaxy Ace Duos. While you'll find the standard A/C adapter and USB cable combo, there are no other extras to further entice buyers - not even headphones.

There's not a lot going on inside the box

The Ace Duos comes with 3GB of internal storage, which is enough to start with, but the omission of a microSD card is still not good news. If you have a large music library you might need to get one separately .

We do appreciate the charger being a single piece, instead of having to use it with the data cable, but still the feeling remains that Samsung could have done a little more to sweeten the retail pot.

Ever since the Wave Y, ruggedly-textured, beveled back panels have been a common sight on most of Samsung's basic smartphones, instead of slick, glossy surfaces which are a fingerprint nightmare and not too secure to hold. The Ace Duos' back panel is nice to the touch, and makes holding the phone a pleasant experience.

Our main grudge is the front panel, where things are a bit boring. We've seen Samsung use the same design over and over and we really wished we were treated to something fresh here. That being said, the Ace Duos is targeted at newcomers to the smartphone game, who are unlikely to be bored with the design.

Overall, the Ace Duos is a design mix of the two generations of the Galaxy Ace. Up front, it's almost impossible to tell apart from the original Ace, while the back has the fine texture and the subtle chin of the Ace 2.

The front panel of the Samsung Galaxy Ace Duos S6802 is mostly composed of the 3.5 inch display. Below it we find the usual three-button combo. There's the traditional Home key in the middle, with capacitive Menu and Back buttons on either side. All three controls have the usual functionality on a long press we've become used to in Gingerbread.

The three buttons below the screen

Looking above the display, we're not greeted by the usual sensors found on most smartphones. An ambient light sensor is missing, so you'll have to adjust the brightness of your screen manually, and there's no front-facing camera either. In fact, there isn't even a proximity sensor. The screen locks instead a couple of seconds into a call and unlocks upon a double tap.

The edges of the Samsung Galaxy Ace Duos S6802 are notably absent of the usual array of slots and buttons we're used to from Samsung. This is not necessarily a bad thing, particularly for fans of more minimalist designs.

The left side hosts only the volume rocker, as well as a small lanyard eyelet. At the other end we have only the power key. A dedicated camera key would've been nice.

The audio jack is on the top, opposite the microphone and the microUSB port

Turning the Galaxy Ace Duos over we find the 5 megapixel auto-focus camera and the loudspeaker grille. There's a distinct lack of an LED flash, which could make low-light shooting with the Ace Duos problematic.

The back panel is pleasing to the touch and resists smudging

Opening the back panel is done easily with the nail tab located on the top, and reveals the 1300 mAh Li-Ion battery that powers the Ace Duos. The panel must be removed to access the microSD card slot, while the two SIM card slots are located underneath the battery.

We concluded our battery tests and the Galaxy Ace Duos S6802 showed average performance. We squeezed out all of the official 7 hours of talk time on a 3G network, almost to the minute. You should consider switching to 2G if that seems like not enough time. You can read more about the Ace Duos battery life in our blog. More info on our testing routine can be found here. 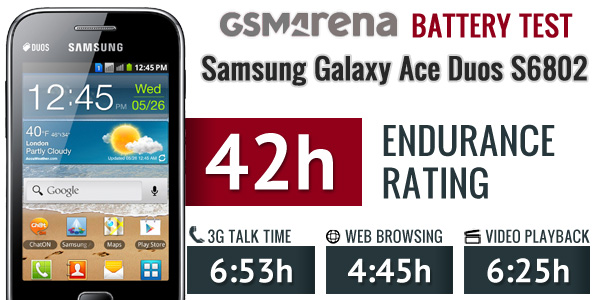 As we mentioned the Samsung Galaxy Ace Duos S6802 comes with a 3.5" LCD of HVGA resolution. It has a pixel density of about 165 ppi, which puts it squarely in the average range for devices in its class.

Half a year ago this would have been a very good screen for the price range, but by today's standards the resolution is unimpressive and while the poor viewing angles and sunlight legibility are to be expected, we can only go as far as to say that the display gets the job done - no more, no less.

The screen is good enough for the class

And here's how the Galaxy Ace Duos screen fared in our traditional display tests. You can learn more about the testing procedures here.

We zoomed into the display using our digital microscope so you can get a better idea of how the pixels are arranged, and how big they are. As you can see, the pixel size is similar to that found on the Samsung Galaxy mini 2, which suggests a display inferior to what than is typical for the Ace family. 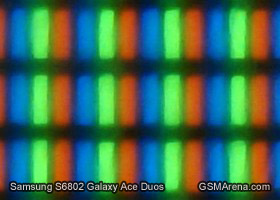 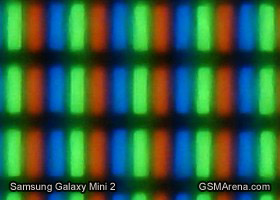 The general handling of the Samsung Galaxy Ace Duos S6802 is pretty good, due in large part to the pleasantly textured back panel and compact, minimalist design. It is a bit of a hassle to have to remove the back panel to get access to the SIM and microSD card slot, but having fewer buttons along the side makes it a bit more pleasing from an aesthetic standpoint - although ultimately it boils down to personal preference.

Up next, we take a look at the Android Gingerbread interface powering the Samsung Ace Duos.