The classic rivalry has been between the Galaxy S and the iPhone but the Galaxy S also has to fight off Android flagships too. Now Samsung has introduced a phone to specifically battle the upcoming iPhone but a quick glimpse at it reveals it may pose a serious competition to the Xperia Z1 Compact, too (or whatever mini phone Sony comes up with this fall. 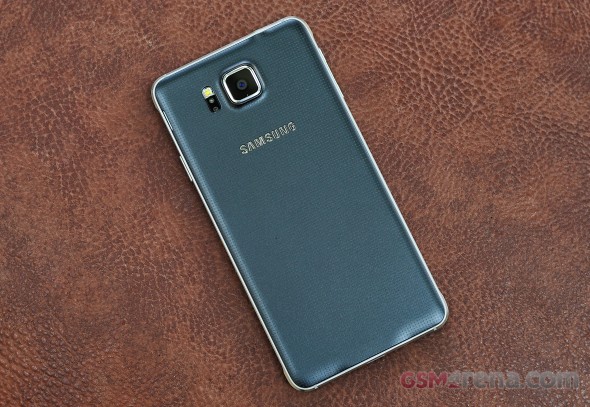 The exposed metal on the sides of the Galaxy Alpha gives the phone a sense or rigidity that plastic never quite manages. Even so we struggle a bit to call the Alpha a premium device - the plastic on the back and the design of the front are very much standard Galaxy affair, from mid-range to flagship.

Samsung's ubiquitous design is hurting the Alpha a bit, you have to tell the uninitiated that this isn't just another Galaxy S mini. This was perhaps a perfect opportunity for the South Korean giant to shakeup its design language.

That said, the Samsung Galaxy Alpha has proper flagship specs - the chipset is a little speed devil and the 12MP camera looks very promising. The phone also brings blazing fast connectivity, the trendy fingerprint reader and a heart rate monitor to boot.

The only place where the Alpha falters seriously in terms of specifications is the measly battery capacity and the lack of a microSD slot. We feel that engaging the Ultra Power Saving Mode might become a way of life for Alpha owners though.

We finally got what many were asking for - a metal Galaxy flagship. It's metal only on the sides but that worked well enough for iPhones, Xperias and Lumias. Whether the Galaxy Alpha can rise above its worn out looks (both hardware and TouchWiz software) and the screen/battery numbers is a question better left for the review.