The Samsung Galaxy Alpha with its metal frame is everywhere these days. Most recently, it's gone yachting in Russia (without actually having been announced, mind you), and it's been said to sport a 64GB version as well - aside from the base model with 32GB (and neither will have a microSD card slot).

Now though we get another rumor about the date of its grand unveiling. And once again it's said to be extremely close. A report from Korean media states that Samsung will finally make the Galaxy Alpha official on August 13 - that's this Wednesday. 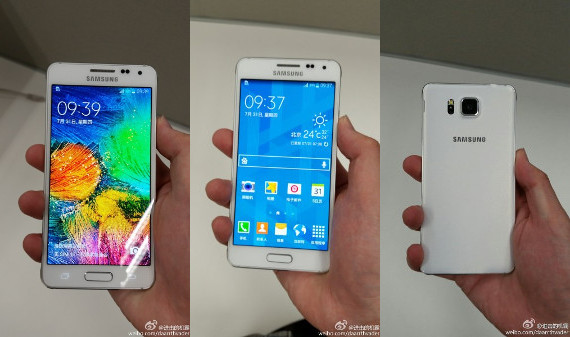 This comes to confirm an earlier mumbling from last month, which also had August 13 as the date of the outing. However, don't forget that at one time the Alpha was said to land on August 4, and that obviously hasn't happened.

So the new information shouldn't be trusted 100% either, but given how much the Galaxy Alpha has leaked over the last week, we wouldn't be at all surprised if it does get the announcement treatment a couple of days from now.

The Galaxy Alpha should have a Samsung Exynos 5433 chipset, though it might also get a Qualcomm Snapdragon 805 for some markets such as South Korea - thanks to that SoC's support for very high-speed LTE.

The handset has also been rumored to have a 4.7-inch 720p touchscreen, a 12 MP rear camera, a 2.1 MP front snapper for selfies, 2GB of RAM, a heart rate monitor, a fingerprint scanner, and Android 4.4 KitKat at the helm.

chamfered edges.....positioning the parts of the front panel was a blatant copy of the iPhone. Hypocrites still dare say it's better looking. The back is not based on iPhone and look......how UGLY!! Oh why dont they make home button round?

Now Samsung is using their heart rate monitor in each and every Flagship phone what a loser.

Thats good - the Russians can spy of this mobile easy. See http://www.smh.com.au/digital-life/consumer-security/why-surveillance-companies-hate-the-iphone-20140812-1032na.html