The Samsung Galaxy Alpha uses a 12MP camera with a 16:9 sensor. That means photos natively fit widescreens like the one on the phone itself or your HDTV.

The HTC One mini 2 drops the low-resolution Ultrapixel camera of the big One (M8) and goes for a regular 13MP shooter. Pixels aren't as big as on the M8 (1.12µm vs. 2µm) but the added resolution is a welcome change. Another change is the move from a 16:9 sensor to a 4:3 one, so viewing on a widescreen will involve either letterboxing or cropping.

As for the front-facing cameras, HTC has equipped its premium mini with a 5MP shooter with a generous f/2.0 aperture. Samsung is using a bog-standard 2.1MP front-facing camera. Both can shoot 1080p video, but the still resolution advantage is heavily in favor of HTC (a statement we never had to make in 2013).

Anyway, the One mini 2 lacks HTC's proprietary ImageChip and certain options are missing, most notably Zoe. There is a Zoe app for creating Highlight videos, but you don't get things like recording short video clips after each photo.

A nice option for knowledgeable photographers is Manual Mode. It lets you tweak focus, shutter speed, ISO, exposure compensation and white balance. If auto mode doesn't get you the look you want, you can tune the camera yourself.

The Samsung Galaxy Alpha uses a lower resolution sensor compared to its big sibling but gets the full feature set. That means Shot & more for some burst photo effects (erasing moving objects, duplicating them or just picking the best shot), dual camera (front and back camera in picture-in-picture mode).

The Alpha also has Selective Focus - a feature that snaps two photos and then uses software to fake rack focus. You can focus on different planes or bring everything into focus. The big HTC One (M8) has a similar feature (which it achieves with a single shot) but it requires the Duo Camera setup, which the One mini 2 lacks.

We'll start off by comparing the field of view for both cameras. The Galaxy Alpha is slightly wider, though because the HTC One mini 2 frame is taller - it fits more vertically and overall fits way more into the frame. This advantage will be lost if you crop the photos to 16:9 aspect ratio, essentially equalizing the fields of view. 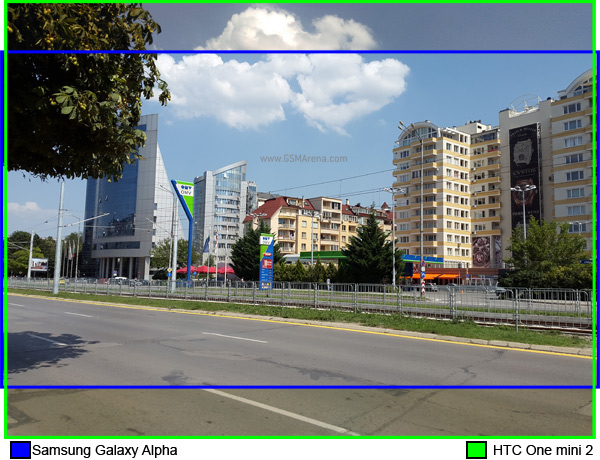 The first thing we noticed (you can even see it in thumbnails) is the heavy yellow tint in HTC One mini 2's photos. It goes beyond warm white balance to the point where it's just too much. Here's a grey building and some white on the sign.

The Galaxy Alpha photo is a bit on the cold side but far closer to the truth. Note that the yellow tint in One mini 2's photos depends on the scene.

The Samsung oversaturates colors a bit, as does the HTC, though the green channel is off (perhaps because of the tint). 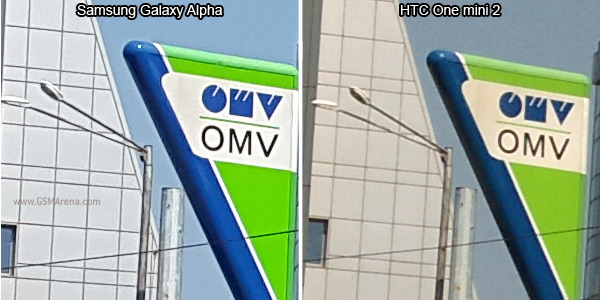 Anyway, the Samsung Galaxy Alpha is sharper - the text in the first panel looks better and so does the foliage. Sometimes however, it's the processing that lets the Alpha down - the second panel shows roof tiles smudged away.

Still, that's fairly rare and, in most cases, the Galaxy Alpha produces the sharper images. The third panel demonstrates the difference in foliage and some slim elements in the scene. Samsung even reigned in its usual sharpening filter that was often too strong. 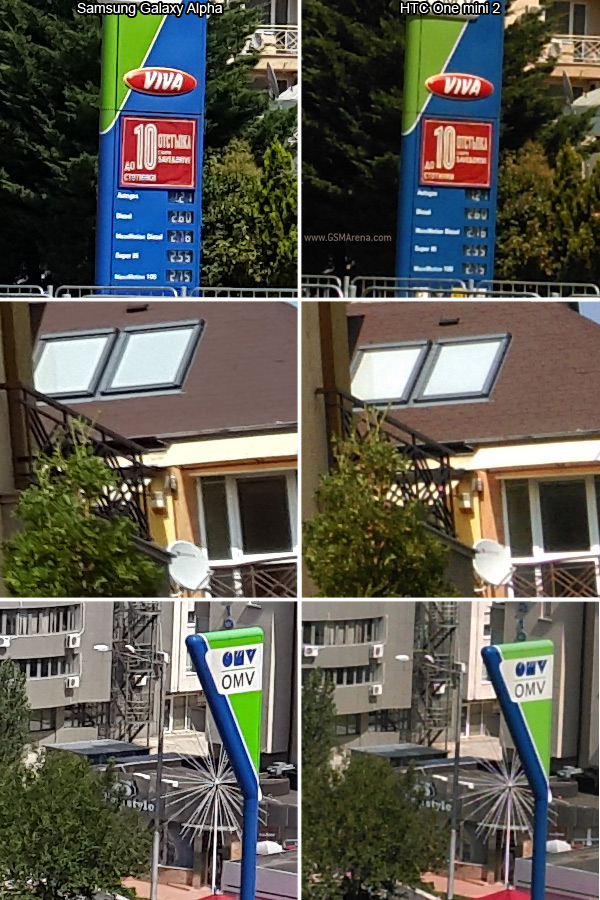 The Samsung Galaxy Alpha's photos generally have less noise in them, though as we saw that can come at the cost of fine detail. The HTC One mini 2's images have noticeably more noise in them but it doesn't drown out fine detail.

A downside of the Samsung camera is that it pretty consistently underexposes shadows. The HTC camera is more careful with shadows but it overexposes bright areas in the image.

The Galaxy Alpha camera has a wider dynamic range managing to capture detail from both highlights and shadows pretty well. The HTC One mini 2 has more issues with shadows (even if it doesn't underexpose them).

Here are the full resolution photos used for the crops:

We enabled HDR mode and it had a positive effect on the HTC, brightening up shadows considerably. The effect was smaller in the Samsung phone but there was less need for it in the first place. It's good to see that neither manufacturer went for the surrealistic, over-the-top HDR we've seen before, particularly from HTC. 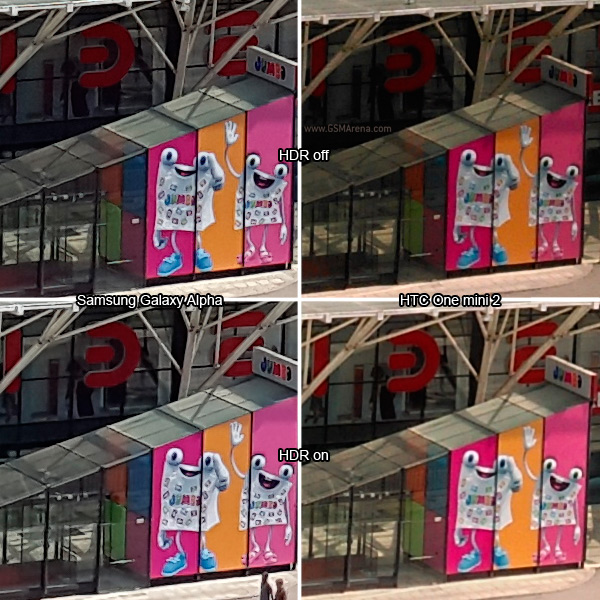 Here are the full-resolution shots we used to make the HDR crops.

Samsung Galaxy Alpha: HDR off (left) and HDR on (right)

Winner: Samsung Galaxy Alpha. Photos are not perfect but it's mostly nitpicking, the camera is sharp and the native 16:9 aspect ratio makes it better-suited for modern screens.

The HTC One mini 2 held its own, the One mini from last year with the 4MP UltraPixel camera wouldn't have done nearly as well. We also like the manual controls but we can't help but feel that HTC shortchanged the One mini 2 by excluding the ImageChip.