We already know that Samsung is working on a new 'C' series of smartphones, with the Galaxy C5 already being the subject a few leaks and rumors until now, and the C7 being spotted on AnTuTu. Now, the latter has been spotted on GFXBench as well, revealing a 5.5-inch display. 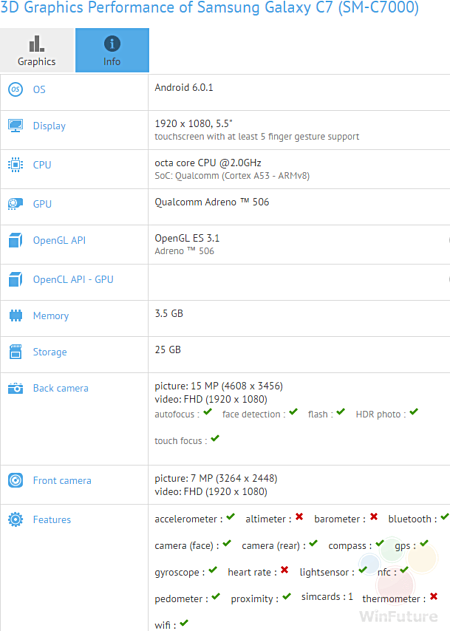 Before we proceed further, it's worth mentioning that Indian import export site Zauba lists the SM-C7000 with 5.7-inch display - so, there's still a contradiction there.

Anyway, moving on, other specs that the GFXBench listing reveals are similar to those revealed by AnTuTu - SD625 SoC, full HD display, 4GB/32GB memory configuration, 16MP/8MP camera combo, and Android 6.0.1.

The Galaxy C series is rumored to feature thin metallic bodies, and is expected to launch sometime next month. It is, however, expected to be exclusive to China. As for the pricing, the only reference we currently have is the Zauba listing, which reveals a tag of INR 13,635 (around $205) for the C7.

the cost in zauba is the actual making price of the phone i guess, and for now c5 has been priced for 300$ for 32gb so c7 would be more costly

I hope it will available in global market

samsung only favoring the chinese market