After being spotted on Geekbench and AnTuTu, the Samsung Galaxy C9 has now appeared on GFXBench, confirming the flagship-like specs that have already been revealed.

The GFXBench listing confirms that the phone will be powered by Snapdragon 652 chipset and sport a full HD display resolution. RAM will be 6GB, while storage will be 64GB. The handset will feature a 16MP/16MP camera combo, and run Android 6.0.1 out of the box. 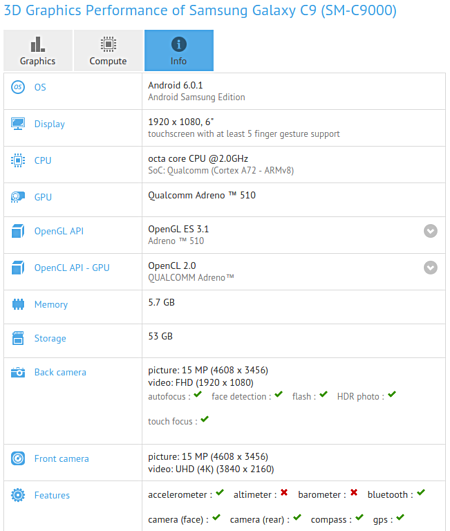 In addition, the listing reveals that the Galaxy C9 will have a screen size of 6-inches, and will also support NFC. For those who missed, the device is rumored to be launched in the in Oct-Nov time frame.

I want to bay

I'm glad that Samsung is coming up with another 6 inch phone after C9 pro 2016. I really hope that crucial LTE bands for USA (band 4, 12 and 17) will be included this time. There is a consumer base for large phones not only in Asia but here in US...