The retail box is eco-friendly too

In a manner befitting its eco-credentials, the Samsung Galaxy Exhilarate comes in a box, made entirely out of recycled paper. Inside, you will find a charger and a microUSB cable to go with the usual set of booklets.

Headphones and a microSD card are unsurprisingly missing from the device's box. It should hardly be a surprise in this price range though.

Let's be honest here - the Samsung Galaxy Exhilarate will definitely not win a beauty contest. Having said that, the device looks like quite a few Samsung offerings launched over the past year. Finished in an all-black color scheme, the I577 can be branded as dull or understated depending on one's opinion. We wish its designers put a little more effort in distinguishing its eco features a tad more.

Build quality is on the usually high Samsung level. The I577 looks like it can take a good deal of daily abuse.

The measures of the smartphone are more than acceptable. They are 122 x 63 x 12mm, while its weight tips the scale at the fairly acceptable 130 grams. The Galaxy Exhilarate is extremely pocketable due to its 4" display which, by today's standards, is fairly small.

There's hardly a more familiar sight on a Samsung smartphone than the 4" Super AMOLED screen of the Samsung Galaxy Exhilarate. The PenTile WVGA unit does a great job with its infinite contrast and deep blacks, but its age begins to show this time around.

The 4" WVGA Super AMOLED is quite familiar by now

Above the screen is where the earpiece, the usual set of sensors, as well as the front facing camera are located. Below it, you have the ubiquitous for all 2011 U.S. Samsung droids, four touch sensitive buttons.

The volume rocker sits lonely on the left-hand side of the phone. On the right side, you will find the power/lock key, as well as the microSD card slot.

The 3.5mm audio jack of the handset sits at the top with the latch for removing the phone's battery cover and the secondary microphone keeping it company. The microUSB port and mouthpiece reside at the bottom.

The view on the device's top and bottom

The 5MP camera, its LED flash, the loudspeaker grille, as well as a "Galaxy" logo are sitting at the top of the device's back. There is also a hint of a chin at the bottom.

Under the battery cover, there are no surprises. Along with observing its usual duties, the 1750mAh battery also serves as the source of the phone's NFC talents,.

The Samsung Galaxy Exhilarate achieved the decent endurance rating of 36 hours in our battery test. This means that your phone will make it through a day and a half if you use it for an hour each of telephony, web browsing and video playback daily. 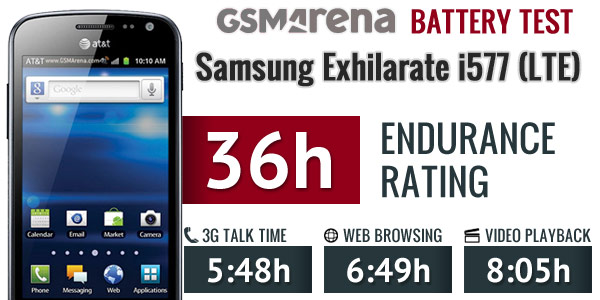 Handling the Samsung Exhilarate is easy. Due to the smaller screen, even one-handed operation is quite easy and comfortable. The back cover has grippy texture, so accidental drops are not likely.

Overall, we think the design of the Samsung Galaxy Exhilarate deserved a bit more attention. Build quality is on the typically high Samsung level but the overall looks of the device are quite dull.

Following next is a look at the ageing OS of the handset.