The Galaxy Express has the trademark white paintjob we've come to associate all new Android-powered Samsung's ever since the S III came out. It measures 132.2 x 69.1 x 9.3mm, which is marginally smaller but thicker than the US variant.

Weight-wise, it is a negligible 3.1g heavier, but it's still the same slim handset that's pretty comfortable to handle and easy to pocket.

The Samsung Galaxy Express design is a pretty strong reference to its standing in the pecking order. It has borrowed heavily of the Galaxy S III design and finish, which results in a surprisingly good feel. And while looks are strictly a matter of personal preference, the good grip and the fingerprint-resistance are not - and they are both present here.

Our white Galaxy Express next to the Galaxy S III

The Galaxy Express back tends to become more slippery, the more you handle it. While the 4.5 inch screen is manageable, it lies on that tricky precipice between too large and just right, depending on your preference.

As far as durability goes, the Samsung's hyperglaze coating has performed very well since its inception on the S III, so we have no reason to believe the paintjob will fade or chip anytime soon.

The controls on the Samsung Galaxy Express are more or less identical to what's become a proven formula for Samsung since the S III. Below the screen we find the same three keys as on other Galaxy's - the capacitive Menu and Back buttons either side of a hardware Home key, which can be set to either always illuminate or just when you interact with them (or the screen).

The white paintjob can make them a little harder to see than on a darker finish.

The three-button combo below the screen

The keys are well-sized and spaced to allow for comfortable use and the capacitive touch technology makes sure the transition between them and the screen is seamless.

Above the display we have the earpiece, as well as the proximity sensor. There's an ambient light sensor to to control automatic brightness. There's a 1.3 megapixel front-facing camera for video calling as well.

The 3.5mm headphone jack is at the top of the phone. There's also a secondary microphone, which allows stereo sound recording in videos.

On the left side of the Samsung I8730 Galaxy Express we find the volume rocker, while the power/lock key is symmetrically placed across on the right. There's no dedicated camera shutter key.

The power key is on the right, while the volume rocker is on the left

The 5 megapixel camera lens and the single LED flash can be found on the back, alongside a loudspeaker grille in the bottom right corner.

The 5MP camera is the star backstage

The back panel comes off easily, and underneath you'll find a microSD card slot which is hot-swappable, and a micro-SIM card slot, which is not.

The two card slots are located under the back panel

Samsung have included a respectable 2000 mAh battery with the Galaxy Express, and its performance is very good indeed - the Express was able to reach a score of a whopping 59 hours. 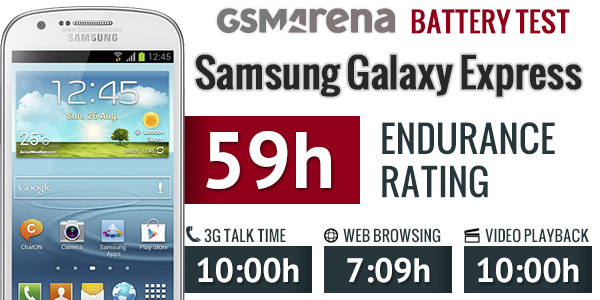