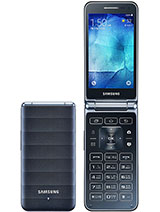 Hope this phone come to Indonesia.

I really like the design, but lacks off flash :(
I wish they will released the dual sim and better spec next year (of course with better price :p)

really like the design. hopefully it come to Malaysia.

Samsung Korea, will it be released in Malaysia? We like clamshell mobile phone too. Don't just released it in Korea. Make it available else where too, we are fed up with candybar shape smartphone.....

I dream for folder phone but I don't like that this phone don't have a second screen to see who's calling me...

I hope it comes to Indonesia...

Uday, 31 Jul 2015This phone price is higher than their best phone (Grand Prime). I mean why you guys make us f... morethe galaxy grand prime is not their best phone. not by a long shot. the reason they price it this high is because there is a market of people who want the ease of a smartphone but still want the feel of a flip phone. so therefore they merged the best of both worlds and put a price tag on it. they will more than likely take a loss on it. but there is no reason to be mad at them for it. if you dont like it then dont buy it. that simple

Gabe, 01 Aug 2015This phone is proof that Samsung always overprice their own shit. No matter that i love samsun... morei love folder phones but in this price its really overpriced and we shouldnt forget samsung was one of the biggest folder phones in the past so make sth new is not really hard for them to release it to the market with usd 500 for the specs same as old galaxy mega 6.3

This phone is proof that Samsung always overprice their own shit. No matter that i love samsung and using their devices all over my house, this is reason why i start to hate them a bit...

This phone price is higher than their best phone (Grand Prime).
I mean why you guys make us fool , seriously F*** off all.
That's why I hate Samsung.

Why couldn't they use the exterior design of this flip phone as other Samsung Galaxy back panel design. Absolutely more gorgeous compare to that glass they had made.