Samsung just made the Galaxy Grand Prime official in India with its pricing and availability also revealed. The phone will launch by the end of the week with a suggested retail price of $280 (INR 16000). 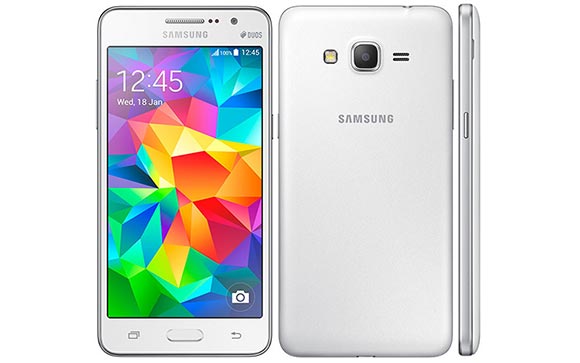 The Galaxy Grand Prime features a 64-bit 1.2GHz quad-core Cortex-A53 CPU and 1GB of RAM on the Snapdragon 410 chipset. Internal memory is 8GB but can be expanded with an additional 64GB microSD card. At the front, there's a 5" LCD display of qHD resolution (960x540 pixels).

The dual-SIM smartphone (dual standby, too) runs Android 4.4 KitKat and comes with a 5MP selfie camera. At the back, there's a more capable 8MP shooter with LED flash and 1080p video recording.

The phone measures 144.8 x 72.1 x 8.6mm and weighs 156 grams. Its 2,600mAh battery is user replaceable, but there are no estimates on talk and standby times provided. As for the color variants, the phone will be offered in white and black. There's also a dual-SIM version of the phone.

This is a very smart looking phone.According to my opinion , it must have gorilla glass protection and price should be below rs. 13000. Awesome phone

What's your mind buy it or not ?

Samsung still remains crapsung.Lumia 730 holds carl Zeiss lens which is the best so all those who thinks windows are nothing,they need rehabilitation :P I am owning Lumia 720 with just 512mb RAM still its butter smooth.