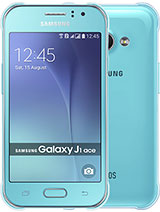 this phone has best feauters as well as new phones models

samsung galaxy j1 ace is so dope.. I've never had any inconveniences while using it

hi! it's a good and handsome mobile with good features

I just bought this phone last month. I love the design & size is easily grip with one hand.

Quite cheap but had limited storage. Thus, have to put memory card. So far, it was good even it comes with low specifications.

Wish it has more capacity for the storage purpose. ;)

First of all, I want to say that there are a couple of versions of this phone (you can see them at the top of the phone's specs in this website). I have the J110M model, which has 1GB of RAM, a Quad Core 1.2 GHz Marvell PXA1908 CPU and Android 5.1

So, here I want to say some of the major things to consider about this device based on my experience with it:

1. The resolution of this display is a bit low, however the AMOLED screen compensates it. Now, the AMOLED screen gives more vibrant and artificial colors compared to an LCD screen.
2. The primary camera takes OK photos, it takes about 2-3 seconds to take a photo. I have taken some nice photos. However, I have also taken some absolutely horrible photos. If you are going to use it for taking pictures outside, you should be pleased. If you are taking photos inside, you'll probably have to adjust the ISO or use night mode to try to take a good picture.
3. The secondary camera for selfies is quite good. It takes the photo almost instantly and it's very crisp and the colors are good.
4. The CPU is the equivalent of a Snapdragon 410. All of the games I have played in this device (including Asphalt 8 and Need for Speed No limit) had no or insignificant lag. The only game I had problems with was Real Racing 3, the game had a medium amount of lag which made it unplayable.
5. The speakers are definitely not the best, but they are OK.
6. The earpiece is good, I think. I haven't use it much, so I can't give an honest answer.

I think that's all. If you have any question about it, feel free to ask me about it.

In my opinion J1 ace 4g is good it have all the specs which are good at this range 1gb ram 8gb memory + the processor is 1.5ghz it is better then the previous model and it does not hangs even in games It is good and improved model.

Anonymous, 24 Apr 2016this phone is crap. it will shut off randomly if the charger is plugged in it will heat up the... morepls tell me true
Is this is new and is good to operate or not ?
And what r the specifications?

Anonymous, 24 Apr 2016this phone is crap. it will shut off randomly if the charger is plugged in it will heat up the... morePerhaps,you can't properly use it

this phone is crap. it will shut off randomly if the charger is plugged in it will heat up the battery and then the phone gets really hot and luckily ive caught it before it starts to burn. the screen will go to sleep then it wont come back on until i take the battery out and put it back in. it will randomly restart. i havnt been able to complete a phone call in months. because the phones audio will just go out during a call so ill still be connected but i cant hear the person on the other line and they cant hear me. i bought one for my girlfriend when i bought mine she will send a text to someone and they will get it 30 times when she only sent it once. other times she will send me a text multiple times and ill never get it. i could go on and on this phone is complete crap i've factory reset it 3 times got a new battery twice. almost thrown it into a bonfire 4 times because it makes me mad.

KAKA 8, 18 Apr 2016It is not such a bad choice. Works fine. Better than phone of similar specifications. Just mak... moreWhere can I get the 1gb ram and 8gb of storage??

reiffer, 18 Apr 2016in most phones when that happens u need to clear the cache memory of the individual apps that ... morehow operation on certain types of phones CDMA

hello friend's is it play 1080p video without player? and is it 1gb ram version available .

It is not such a bad choice. Works fine. Better than phone of similar specifications. Just make sure that you are getting model with 1gb ram