The Galaxy K zoom speeds down right onto our review track, ready to take on any cameraphone contender. This speedster is equipped with a 10x optical zoom and OIS and if you were to see only its back, you would hardly recognize you are staring at an Android smartphone with a 4.8-inch Super AMOLED screen on the other side. 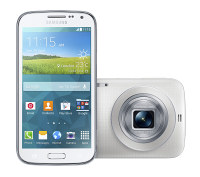 The original Galaxy Camera didn't have phone functionality and was way too big for comfort. The Galaxy S4 zoom's specs were too low-end to deserve the "Galaxy S" badge. The Galaxy K zoom is reasonably sized (about as big as a Galaxy S4, except thicker and heavier) and offers solid midrange specs.

The days of taking several photos and handing over the roll at the local shop to be developed are long gone, these days a photo must be seen - and shared - the moment it has been snapped. There's more than a few social networks and services that change so often that even so-called "smart cameras" can't keep up.

This is half of the reason smartphones have displaced traditional cameras - posting on Instagram / Snapchat / Vine is a lot more common than collecting photos in a family album. The other half is just not having to deal with two devices - did you take the camera? Did you charge the battery, did you offload the photos?

Samsung Galaxy K zoom stretching its lens at the office

Just using the "good enough" camera on your smartphone solves those issues but you lose the zoom and OIS even a cheap a point-and-shoot offers and the flash is usually a weakling LED.

The Samsung Galaxy K zoom offers the best of both worlds - it's an Android smartphone and it's a camera. The cost you'd pay is the increased thickness and weight but it still takes less space than a stand-alone camera and a phone.

I am so sad they no longer produce phones like this.

When the new version of galaxy k zoom is coming out??????