The controls of the phone are entirely phone-centric. The front features Samsung's button arrangement below the screen, a hardware Home key and capacitive App switcher and Back buttons.

Above the screen is the earpiece, sensors and a front-facing 2MP camera. You need to be mindful of the front-facing camera when shooting selfies with the phone held horizontally.

On the right side (which becomes the top side when you use the Galaxy K zoom as a camera) is the big, comfortable shutter key.

Update: As our readers pointed out there is a way to launch the camera from the locksreen but you need to press and hold both the shutter key and the volume up key, not all that convenient.

On the left / bottom side of the K zoom is the microSD card slot under a protective flap, hot-swapping cards is easy. Also here is the lanyard eyelet but the tripod mount from the Galaxy S4 zoom has been dropped.

The back is what sets the Galaxy K zoom apart from other devices - a prominent camera module protrudes from the back. There is glass covering the internals of the lens but you should still be careful when putting the phone on a rough surface as scratches on that glass can affect image quality.

Scratches on the rest of the module are just cosmetic damage, but unfortunately, we got an extraordinary amount of those in just a few short days. When lying on its back, the Galaxy K zoom lies exactly on the lens ring and the lens ring on our review unit was covered all over with scratches in no time even though we took good care of it.

Unlike the S4 Zoom, you can't rotate the lens ring. The zoom operation is handled exclusively by the side volume keys.

The Galaxy K zoom back houses a powerful (by phone standards) xenon flash accompanied by a red focus assist LED. The loudspeaker grille is on the other side of the camera.

The lens extends outwards when you turn on the camera

The bottom side of the device is home to the microUSB port (which doubles as TV-Out port thanks to MHL 1.3), while the 3.5mm audio jack is on top. Each side also has a mic used for calls and stereo sound capture in videos.

The Samsung Galaxy K zoom has a rich connectivity package. This includes Cat. 4 LTE-A for up to 150Mbps of download speeds and 50Mbps worth of upload. Outside of 4G coverage you get 42Mbps downlink from quad-band 3G HSPA and there's quad-band 2G as well.

Local connectivity includes dual-band Wi-Fi a/b/g/n and Bluetooth 4.0 LE. The LE standard is used in some sports accessories though others require ANT+, which is also supported.

The microUSB port supports USB On-the-go for hooking up external storage and MHL 1.3 for outputting HD video. You'll need the appropriate adapter for each of these. The other wired adapter is a standard 3.5mm audio jack.

The Galaxy K zoom supports NFC for quick pairing with other devices and reading NFC tags. The only thing missing is an IR blaster.

The final piece of the connectivity puzzle is A-GPS for positioning, GLONASS is supported as well.

The Samsung Galaxy K zoom packs a relatively large 2,430mAh battery, that's some 100mAh more than what the Galaxy S4 zoom had. The K zoom is quite thick and heavy (by smartphone standards) but most of that is from the camera module, not the battery. Keep in mind that most point-and-shoot cameras have much smaller batteries but they don't have so many radios or CPU-hungry apps to feed.

The 2,430mAh battery is user-replaceable

Still, the Galaxy K zoom posted excellent standby power draw and it did very well in the call test - despite its camera looks, it's a proper phone too. The web browsing time is a respectable 9 hours too and you'll be able to get over 10 hours of video playback, enough to see all the footage you've shot. 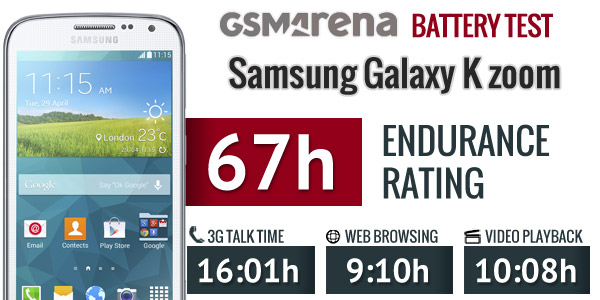 The battery life of the Samsung Galaxy K zoom is examined in more detail on our blog. If you are curious about how the test itself is performed, this page has the answer.