Samsung Galaxy M02 and A02 pop-up in certification listing

We won’t pretend like we know exactly what Samsung is doing or really planning with recent Galaxy “0X” devices. We know that these tend to span both the Galaxy A and Galaxy M lines, sometimes feature an “s” or Core modifier and are often re-brands of the same basic or very similar hardware, meant for different markets. 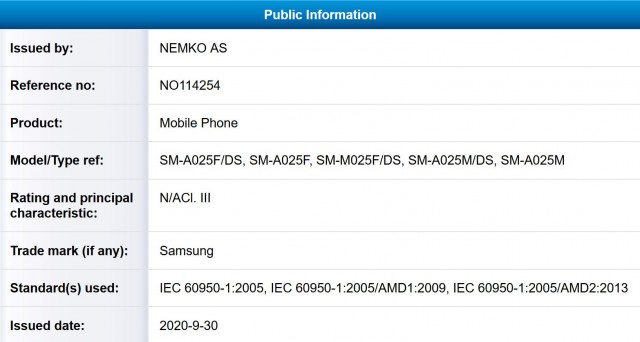 Recently a certification listing was spotted on the Nemko AS website, featuring the SM-A025F/DS, SM-A025F, SM-M025F/DS, SM-A025M/DS and SM-A025M models numbers. These most likely belong to the Galaxy A02 and Galaxy M02. The fact that both are included in the same certification document by the Norwegian company is a strong indication that the M02 will simply be the preferred marketing name for the A02 in some regions.

We only phrase this comparison in this manner since the Galaxy A02 has already popped-up in a few leaks, including a GeekBench run. The latter offers a few potential hardware details, like 2GB of RAM, 32GB of storage and an undisclosed Qualcomm chipset. 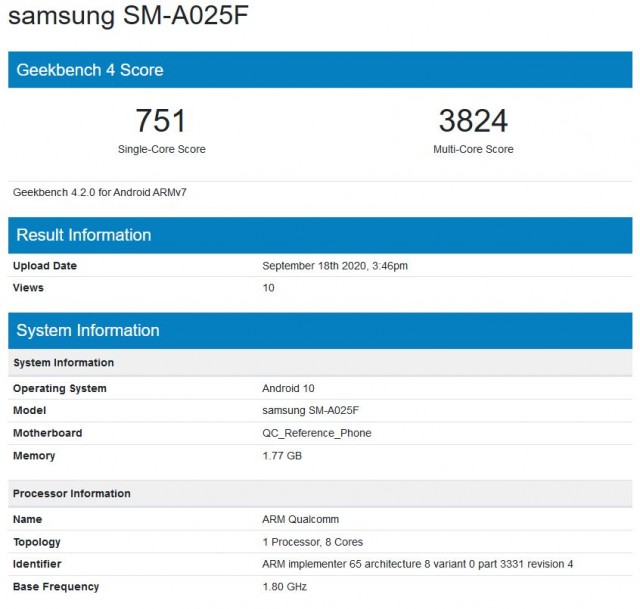 Digging around into some more, it seems that other Galaxy A02 leaks suggest a 5.7-inch, HD+ LCD display, a Snapdragon 450 chipset, 3,500 mAh battery, microSD support and a dual main (13MP + 2MP depth sensor) and 8MP selfie camera setup.

In any case, we are definitely looking at a budget device here, with a fairly-viable rough price estimate sitting around or even below the $130 mark.

The fact that people are complaining that this phone has 2 GB of RAM is just sad. This is a $99 phone, what do you expect?

A01 had crappy 16gb and TFT screen, sounds good to me. LCD and storage compact