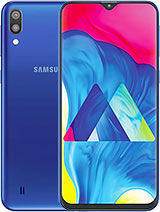 Anonymous, 19 Jan 2019The photo shows that it will be in android 9.0. It will receive pie update in August this year

Okay, some info about the m10 here is incorrect
-m10's second camera is a wide angle lens, not a depth sensor
-m10 has auto brightness and gyro sensor which are missing in the list

Looks like a J6 with a drop-like notch. And I'm still wondering why Samsung still using the old 7870. The SoC was cool for 2016-2017 standards. Today is just outdated. And in my country for sure price will be over $200.

abdulakhakar, 22 Jan 2019this is for india market , galaxy m series is produced on india factory, in other countries p... moreWell said

Launched in India at around Rs 8k

Anonymous, 21 Jan 2019No actually its around $120 so probably its a bargainthis is for india market , galaxy m series is produced on india factory, in other countries price is higher .

AnonD-829017, 20 Jan 2019Way too big! This will be a nightmare to use.Can't agree with you more, the screen should've been 5-5.45 inch. This would've been perfect. Since you cant play HD quality games in this phone because of its weak cpu and gpu.Big screen are better for extreme graphics games, and this phone simply does not have that kind of gaming prowess.and they must keep the price below 120 euro if they want this phone to be a Hit

Way too big! This will be a nightmare to use.

lol this phone is a joke. A single core gpu and only 2 performance cores for the cpu

Rayne , 19 Jan 2019J series have super amoled screen and original design. This looks like a Chinese smartphone kn... moreJ series have Samsung design so this will have it too.
Fact is on the whole world last 3 years most phones looks alike.
Compared to what we have 10-15 years ago.
And the J series were very expensive piece of junk.
150-200 or 300 bucks in case of J7 for a phone worth maybe 80 up to 150 euros example of of J7