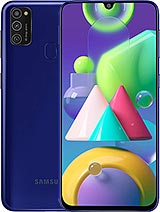 No otg .It is very disappointed to know that a latest mobile samsung m21 has no USB otg .

Acctualy this phone support OTG. And its good overal

Bought this phone in December 2020. So far, it works flawlessly. It runs smooth. Camera is really good. This is my first Samsung phone. I was Redmi user before. And I don't want to go back to Redmi anymore. MIUi sucks.

Hello guys, is m21 better than redmi note 10? I want to buy new phone but still confuse which better, thank you 🙏

Samsung galaxy M21 is a third class phone, I bought this phone on 2 months before, already I have visited 2 times at the service center, the network , battery life, and the camera quality all is third class. According to me OPPO A53 is far better then the samsung galaxy m21 at this price range, samsung galaxy m21 claims that rear camera is 48 mega pixel but the camera quality is just like a 8 mega pixel, claims battery is 6000 mah but the battery life is just like a 4000 mah, and this 4g mobiles network quality is just like a 2 g mobile. Overall buying samsung mobile is total wastage of money

you need to update info, because m21 have an nfc

I used thise very very good .I love it 💘

After last updates on 03 Apr 2021, my mobile gets very slow charging. Another one same mobile same problems.

ssamaddd, 01 Apr 2021where , INDIA ? Because i'm in Morocco and still don't get any update !You will get it in your country ASAP.

After one ui 3.1 update camera zoom is not work in pro mode .anyone face this problem?

Noone, 28 Mar 2021I just got the galaxy m21 6 GB 128 GB variant . Its working Flawlessly. Ive tested a few gam... moreHey, how much internal we get when you first get it? because of the system memory?

Model number SM-M215FZKU has NFC despite listing show opposite.

I just got the galaxy m21 6 GB 128 GB variant . Its working
Flawlessly. Ive tested a few games like pubg , cod and
into the dead 2 . They play smoothly, no lags, no watchable
framedrops, no too much heat level.I will recommend it to
every one who are searching for a cool and awesome budget,
gaming friendly smartphone. A BIG THUMBS UP FOR GALAXY
M21 👍

I had recently got one M12 25th March..but its heating up too much after SW updates also, as well battery is draining quickly, so sad to experience such performance from Samsung Product, never expected & unfortunately there is no quick response team or facility who responds in such cases, the shopkeeper told me that I have to prove that the heating is enough that is under unusable limits, I really feel sad for such uneducated partners of Samsung...so pathetic...:(