Samsung are continuing their strong push at the start of 2012 with a new announcement. The company just introduced the mid-range Samsung Galaxy M Style M340S smartphone. The Android handset is going to debut in Korea, but there's no saying if availability elsewhere will follow.

Design-wise, the Samsung Galaxy M Style is quite reminiscent of its I9103 Galaxy R sibling, but its internals are quite different. The dual-core Cortex-A9 CPU has been replaced by a 1 GHz single-core Cortex-A8 unit and there's DMB-T support this time. 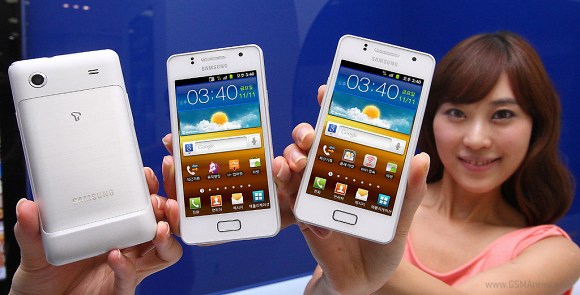 The Samsung Galaxy M comes with a really modest 3 megapixel camera, but it uses a 4" Super AMOLED screen, instead of the 4.2" Super-LCD unit, found on the I9103. The Galaxy M runs on Android 2.3 Gingerbread and has the usual TouchWiz customizations on top of that.

Bluetooth 3.0 connectivity and 4GB of internal memory are the only other specs of the Samsung Galaxy M that have been confirmed so far.

We do know though that the smartphone will be available in Platinum Silver, Blue Black and Lavender Pink and will cost about $500.