Samsung Galaxy Mega 2 shows its specs in a benchmark

The successor to the original Galaxy Mega line is clearly in the works at Samsung. The Galaxy Mega 2 has had most of its important specs leaked because a pre-production unit has been put through the paces of a well known graphics benchmark.

Previously we had heard that the Mega 2 would come with a 6-inch display, but now it seems the actual screen size will be 5.9 inches. Not a big difference, either way.

The Galaxy Mega 2 will also have 720p HD resolution, 2GB of RAM, 8GB of internal storage, a 12 MP rear camera, and a 5 MP front shooter for selfies. You should also expect to see a microSD card slot, Wi-Fi support, Bluetooth, GPS, and NFC. 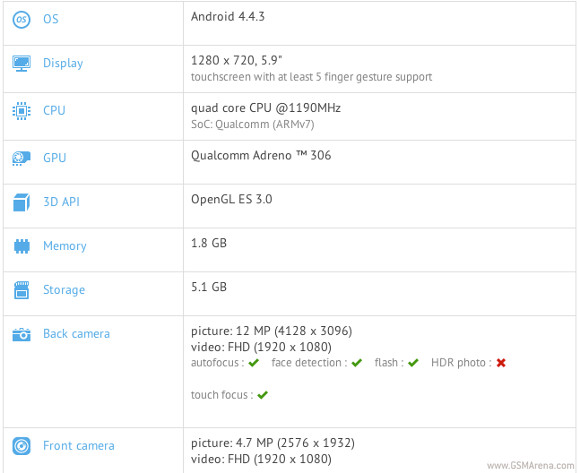 The handset will be powered by the Qualcomm Snapdragon 410 chipset that comes with a 1.2 GHz quad-core CPU and an Adreno 306 GPU. This is in fact the first Qualcomm chipset that's 64-bit, and it was announced back in December of last year.

As you may have gathered from its CPU's frequency, this isn't a high-end System-on-a-Chip however. Rather it aims to compete in the midrange segment, and as such it seems to be a good fit for the Samsung Galaxy Mega 2.

The exact device that got tested runs Android 4.4.3 KitKat and bears the model number SM-G7508, which means this particular variation might be headed to China (based on the company's previous use of "8" at the end of model designations).

Fret not, though, for the Galaxy Mega 2 should get a proper international release too - though going by SM-G750 in that case.

Who would I talk to at Samsung about the upcoming Mega 2, like the rest of you I believe that the mega line should be on par with the Note and S lines of Samsung phones.

This should be 8" display.