Screen size. Just like last year was the year of the multi-core processor, 2013 is surely the year of the big screen. There was a time when 5 inches of diagonal were considered overkill, but with just about every major brand now flaunting a fullHD five-incher, it seems the only way to go is up.

And Samsung has done just that. With the release of the Samsung Galaxy Mega 6.3 the Galaxy Mega 5.8, the Koreans are looking to blur the lines between phone and phablet even further, and add even more inches to its repertoire of display sizes. 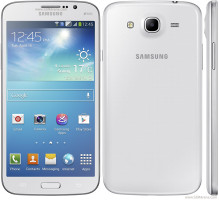 The Samsung Galaxy Mega 5.8 is the lesser half of the new Mega duo, and if a 6.3" screen is just too big for you, then 5.8" may be just your size. Plus, there may even be a few people out there that might still consider it a phone.

So, what does the Mega 5.8 offer that other large-screen devices do not? Is the optional dual-SIM support and the more attractive pricing the only redeeming quality it has over the likes of the Samsung Galaxy Note II? We'll tackle all those questions and more, but first let's take a look at the key features at a glance.

One thing to keep in mind regarding the 5.8-inch display is that it goes with a reduction in screen resolution as well, so you get even less pixels per inch than the Mega 6.3. We won't go as far as to say that at 190ppi the screen is "bad", but it cannot obviously measure up to the ultra-crisp 400+ppi displays of the most recent 1080p flagships.

When compared to the Mega 6.3, it seems that some additional sacrifices come with having a smaller display. As far as connectivity goes, gone are NFC capabilities, the IR-port, as well as the support for the new 802.11ac WiFi standard. But let's keep in mind that the Mega 6.3 doesn't come with a dual-SIM version, so it's not one-way traffic.

Samsung Galaxy Mega 5.8 in our office

The Samsung Galaxy Mega 5.8 is powered by a Broadcom SoC, featuring a dual-core CPU - something we we haven't yet seen clocked at 1.4 GHz, so we're curious to see how it fares against the dual-core 1.7 GHz Krait CPU of the Mega 6.3. The latter is expected to trash its rival in benchmark tests, but is the difference obvious in real-life scenarios?

But all that in due course - up next, join us as we take a look at the exterior of the Samsung Galaxy Mega 5.8.

can i connect otg from samsung mega 5.8

The only problem I had with this phone is that the side button,the metallic silver colors are starting to fade and upto now their's no news whether they will update this phone or not, samsung is not even responding, I guest I have to pay for my phone...