The user interface is based on the Galaxy Camera interface. A virtual shutter key and a capture video button are always available in the viewfinder, so you don't have to switch modes. However, this is certainly not the most convenient solution as, if you're shooting full resolution 8MP photos, you'll have to frame your videos using a 4:3 viewfinder.

The Mode button brings up a carousel with different shooting modes, each mode comes with a descriptive image and text. When you get familiar with those modes, you can switch to the grid, which drops the descriptions but is faster.

There are more settings in the top left corner, but they won't be used very often. Still, there're a number of interesting options here like the setting for the volume rocker to act as a still shutter key, a video shutter key or a zoom lever. Another interesting option is contextual file names - the Galaxy Mega 6.3 will name photos with your location (the GPS needs to be on for this to work).

You can customize the shortcuts available here, but most people will probably stick to the Mode selector.

There are relatively few manual settings, the Galaxy Mega 6.3 just gives you an ISO setting, white balance and exposure compensation. You can also use color effects too.

A selection of color effects

Let's go over the different modes. There are standard modes like Rich Tone (HDR), Panorama, Night and Sports. Panoramas are not as impressive as on the Galaxy S4 - they come out with about 1200px. Here's a panorama sample - the moving car got mangled, but the rest looks okay.

Other modes we've seen on previous Samsung phones like Best Photo and Best Face, which snap multiple photos and let you pick the best one (in the case of Best Face, you can tweak each face in the photo individually). Beauty Shot does some automatic touch up.

Then we get into the more interesting shots. Eraser helps you remove moving objects (e.g. passers by walking into your shot).Drama mode takes a moving object and clones it several times. Note that the resolution for this mode drops to 1080p.

Sound & shot captures a photo and records ambient sound. It sounds pretty cool - for example, you can hear the sea gulls in a beach photo or the roaring of car engines at a race - but we had problems sharing the shot. All the Galaxy Mega 6.3 would send is the still image, a JPEG, and the sound remains on the phone. Shame that Samsung didn't use the standard Audio note feature of JPEG photos for this one.

Overall, Samsung has copied most of the features of the Galaxy S4 camera, but left out some of the premium options. The 360 photo (Photo Sphere) is missing, there's no dual-shot or color effects, even the Cine photo (cinemagrams) has been dropped.

Photos have a lot of fine detail and low noise levels. Colors are slightly oversaturated but fairly accurate and white balance is halfway between neutral and cold (typical for Samsung phone cameras). The Mega 6.3 preserves detail in the shadows, sometimes at the cost of detail in the highlights. You can use the HDR mode to remedy this.

The Field of View is wider than that of the Galaxy S4, it's about the same as the S III's. That's good news since the narrow FoV was one of the complaints we have against the S4 camera. 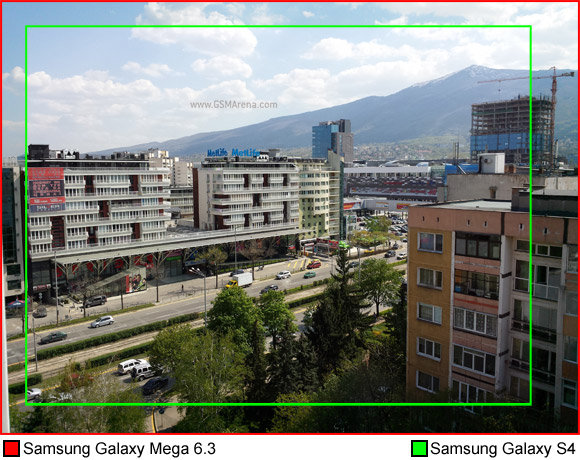 The Samsung Galaxy Mega 6.3 has the previous generation of flagships to contend with in our Photo quality compare tool. Tablet cameras are usually too low-res for a meaningful comparison with the Mega 6.3.

The Samsung Galaxy Mega 6.3 stores videos in MP4 files with a bitrate of 17Mbps. Stereo audio is recorded at 120Kbps and a sampling rate of 48kHz. Those are the same numbers as on the Galaxy S4. You can capture 1080p photos during recording, which is a little pointless.

Videos captured with the Samsung Galaxy Mega 6.3 have a good level of fine detail, though not as good as the S4. The compression occasionally smudges out the detail slightly (but you have to look closely to notice it). Noise levels are low, colors and white balance are similar to those in still images, overall accurate but slightly oversaturated and with a cooler white balance.

You can also take a close look at the quality of Samsung Galaxy Mega 6.3 videos in our Video quality compare tool, there are a number of phablets and even tablets you can pit it against.