Every maker has its own version of what a camera interface should look like - Huawei went with a fairly standard UI, while Samsung is continuing with the Galaxy Camera UI design.

The Huawei camera interface is certainly familiar - a virtual shutter key on the right, flanked by a still/video toggle and the gallery shortcut, then three vital shortcuts on top (front/back camera toggle, flash mode and touch focus toggle). The rest are hidden in a retractable panel on the left, which uses sub-menus.

Samsung combines the still and video camera UI, which simplifies things as you can just start shooting in either mode without having to toggle first. The downside is that if you're doing 4:3 photos (which you should if you want to get the max resolution of 8MP), you get black bars where the left and right portions of the 16:9 video are, which makes framing more difficult.

Anyway, Samsung has made the various options more accessible - to choose a different shooting mode or color effect on the Galaxy Mega 6.3 you only need two taps instead of three on the Ascend Mate. The customizable row of shortcuts can make some features accessible with a single tap.

The aspect ratio mismatch between stills and video aside, the Galaxy Mega 6.3's interface feels more modern and makes shooting and changing settings quicker. Now let's have a look at what those two have to offer in terms of features.

The Samsung Galaxy Mega 6.3 sorts its camera options into three groups. The most interesting one is accessed through the Mode button and offers burst shot, night mode, HDR, panorama, best photo and best face.

Exclusive features are Drama shot (creates multiple copies of a moving object), Eraser (removes a moving object) and Sound & shot (captures ambient sound along with the photo, but such shots can't be shared with other devices).

Then there are the color effects tucked away in a retractable panel at the bottom of the screen. The third one is the Settings menu in the upper left, which controls image properties (ISO, exposure, white balance), shooting assistants (grid, metering, anti-shake) and an option to turn the volume rocker into a zoom lever, still or video shutter key.

The Huawei Ascend Mate on the other hand piles it all in the panel to the left, which offers four options.

First is shooting mode (burst, night mode, HDR, panorama, group shot). Then there are color effects, third are face effects (adds distortions to faces in the shot, like a digital house of mirrors) and finally the settings menu, which offers scenes, ISO, white balance, grid and a few other options.

As usual, we looked at the different fields of view for the two cameras that is how much you can fit in a single shot. The Samsung Galaxy Mega 6.3 camera is wider, meaning you can fit more of the scene standing at a fixed distance compared to the Huawei Ascend Mate, but the downside is there's fewer pixels for each object (as both cameras are 8MP shooters). 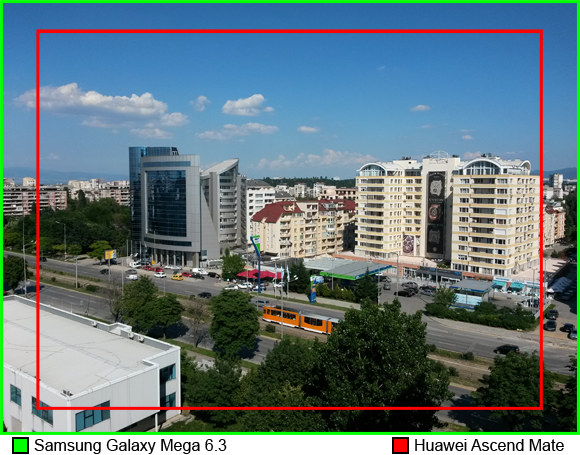 The situation with the FoV for video is virtually the same, the Galaxy Mega 6.3 has a slightly wider camera. 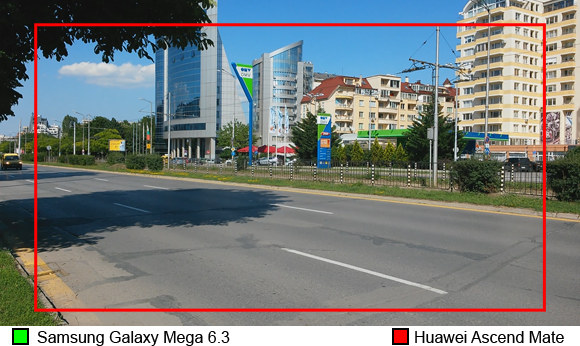 Winner: The Samsung Galaxy Mega 6.3 had an advantage both in terms of UI and feature set. It also has a slightly wider FoV.

Not that the Huawei Ascend Mate is lagging far behind, but it doesn't really bring anything over the company's previous generation.