The Samsung Galaxy Mega 6.3 and the Huawei Ascend Mate both feature 8MP cameras, but that doesn't mean they offer the same image quality. We took sample photos with both and prepared 100% crops, but you can also view the full resolution photos.

Let's start with color, it's one of the first things you notice. Neither phablet is on the mark - the Galaxy Mega 6.3 has slightly oversaturated colors and a green tint over the whole image (it's very noticeable in the sky), while the Ascend Mate offered dull colors in the green channel (check out the tree in the middle).

The Mega 6.3 camera managed to capture more fine detail than the Mate and its images are generally sharper. It's visible in the fire escape stairs, the foliage, the text and the clockwork mechanism in the ad poster.

The Mega 6.3 tends to underexpose shadows to preserve detail in the highlights, while the Ascend Mate prefers the opposite and overexposes highlights to develop the shadows. 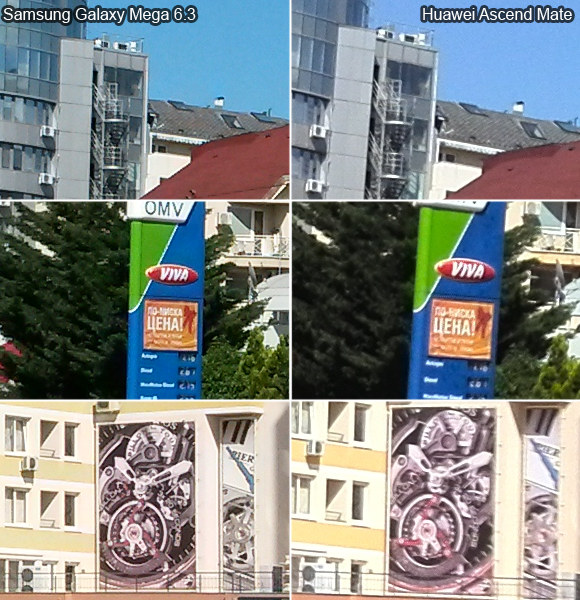 Here are some full resolution photos for a closer look at the image quality of both phablets.

We tried out the HDR modes of both phablets to see how they handle scenes with dark shadows and bright highlights.

Both cameras focused on the shadows, leaving the highlights mostly intact. The Huawei Ascend Mate HDR mode really exaggerates the effect, which many people do not appreciate, and the boosted brightness in the shadows didn't really bring new detail.

The Samsung Galaxy Mega 6.3 was more subtle and actually managed to get some usable detail out of the shadows. 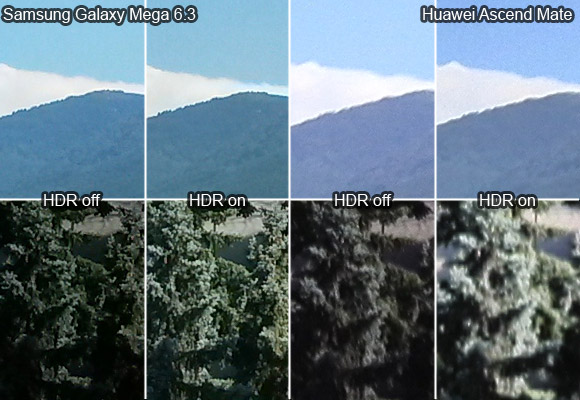 Here are the camera samples we used for the above crop.

We also tried out the panorama modes. The Samsung Galaxy Mega 6.3 does sweep panorama (meaning you just pan left or right), while the Huawei Ascend Mate takes three separate photos. The total resolution is about the same with an advantage for the Mate, which produced a taller image (1200 pixels vs. 1800 pixels).

However, the Galaxy Mega 6.3 did a full 360 circle and was fairly fast, considering it had to shoot a wider arc. The Mate took a couple of seconds after each of the three shots.

Both have stitching problems, especially when there are fast moving objects involved, but the Mega 6.3 did a better job. The Ascend Mate blurs parts of the image to blend the separate shots, which results in blotches of low detail, especially around the seams.

You should also take a peek at our Photo compare tool. It features an ISO chart to measure the synthetic resolution, along with a couple of other charts with colors, high-frequency detail and so on.

Winner: While neither camera is in the top flight of 8MP shooters, the Samsung Galaxy Mega 6.3 produced sharper images. Its did a better job of the HDR and panos than the Mate as well.

The Huawei Ascend Mate could use a tweak in how it processes images and the HDR and panorama modes need work too.

1080p video at 30fps is the target of both phablets and they hit it nicely. The Samsung Galaxy Mega 6.3 records videos at a bitrate of about 17Mpbs, of which 128Kbps are dedicated to stereo audio (48KHz).

Both phablets encode their videos with the AVC codec (a.k.a. h.264), but the Mega 6.3 uses High@L4.0 with CABAC versus the Baseline@L5.0 encoding of the Mate. So, the Mega 6.3 video encoder is more efficient and uses less storage without affecting the quality.

Actually, it manages to produce better image quality as the crop below demonstrates. The image is sharper, which is easily seen in the foliage. A closer look, however, reveals that the Mega 6.3 video "pulses" - the fine detail gets smudged periodically and then returns - so it's not all great with its video encoder. The Ascend Made has a hint of the same problem, but the higher bitrate keeps the effect to a minimum.

Both cameras maintain their respective color tints from the still photos - green for the Mega and pink-purple for the Mate. The videos are smooth and the continuous autofocus isn't too intrusive. 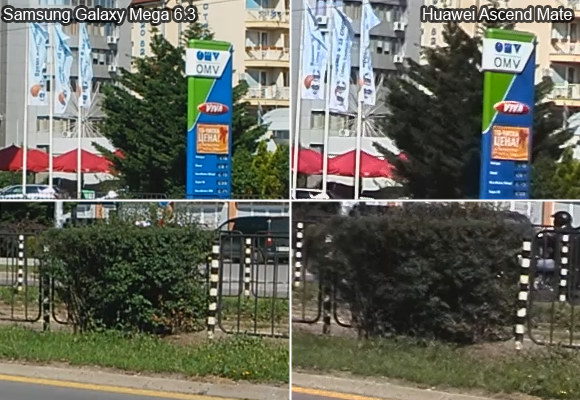 Here are the video samples we shot with both phablets:

Winner: The Samsung Galaxy Mega 6.3 offers better video quality while using less storage and captures slightly better audio. It's not perfect though, we wish Samsung would fix the "pulsing" effect and the color tint.

The Huawei Ascend Mate shoots okay 1080p video, but it's just not up to par.