We didn't really expect Bluetooth headsets, leather pouches or anything along these lines, inside the Samsung Galaxy mini 2's box. Considering the relatively ample inbuilt storage, we can live without a microSD card too, even though it costs manufacturers cents to include. However, we could've really used a wired handsfree, which isn't all that expensive either.

There's not a lot going on inside the box

All you will find inside the compact box is a microUSB charger and a microUSB cable. We do appreciate the charger being a single piece, instead of having to use it with the data cable, but still the feeling remains that Samsung could have done a little better.

Standing at 109.4 x 58.6 x 11.6 mm, the Samsung Galaxy mini 2 is a really compact device by today's standards. It's also pleasingly thin for the class and, since it weighs just over 105g, we doubt it that anyone will mind carrying it around.

Despite being low in the pecking order, the Samsung Galaxy mini 2 offers pretty good build quality. The styling of the back looks like a nice touch by Samsung and the grippy plastic makes sure you won't be dropping the smartphone too often.

Our main grudge is the front panel, where things are a bit boring. We've seen Samsung use the same design over and over and we really wished we were treated to something fresh here. After all, they did bother to make it look a bit like the Galaxy Nexus at the back. It shouldn't have been too to hard do something about the front.

Perhaps a different color that matches the battery cover might have helped the Galaxy mini 2 stand out in the entry-level droid crowd. Then again, maybe it's just a case of us being too picky. As we said, the mini 2 is targeted at newcomers, who are unlikely to be bored with the design.

The front panel of the Samsung Galaxy mini 2 is dominated by the 3.27" HVGA display. The bezels are a bit wider than we are used to, but there's no way around it on a compact phone like the mini 2. You see, bezels have to be at least a few millimeters wide for a touchscreen device to work properly and that makes them appear much bigger on handsets with smaller screens.

There are two ways to look at the image quality of the screen. On one hand, it's a notable improvement over the original, mostly due to the quadruple resolution. On the other hand, contrast is nothing to write home about, while in the same time viewing angles are mediocre and sunlight legibility is disastrous. And then, HVGA is not such a rarity anymore in this price range.

The screen is good enough for the class

As usual, the truth is somewhere in between, the mini 2 screen being par for course - no deal-breakers, but no pleasant surprises either.

Below the Samsung Galaxy mini 2 display, we find the usual three-button combo. There's the traditional Home key in the middle, with capacitive Menu and Back buttons either side. All three controls have the usual functionality on a long press.

The three buttons below the screen

All you get above the screen is the earpiece, so those of you addicted to video-calling might need to take their business elsewhere. An ambient light sensor is also missing, so you'll have to adjust the brightness of your screen manually. There's no front-facing camera or a proximity sensor either.

The left side of the Samsung Galaxy mini 2 S6500 hosts the volume rocker and the microSD card slot. At the other end we have only the power key, but a dedicated camera key wouldn't have made much sense on a smartphone with a fixed focus camera anyway.

The audio jack is on the top, opposite the microphone and the microUSB port

Turning the Galaxy mini 2 over we find the 3 megapixel fixed-focus camera lens and the loudspeaker grille. The specs of the camera alone suggest that it wasn't the designer's top priority, but we'll be examining it in more detail later on.

Opening the battery cover reveals the 1300 mAh Li-Ion juice pack that powers the mini 2. It's said to last for up to 420h of stand-by and up to 6h 50min of talk-time, which is decent if unspectacular. Our battery test the Galaxy mini 2 above average with a rating of 38h. Find more about the testing procedures here. 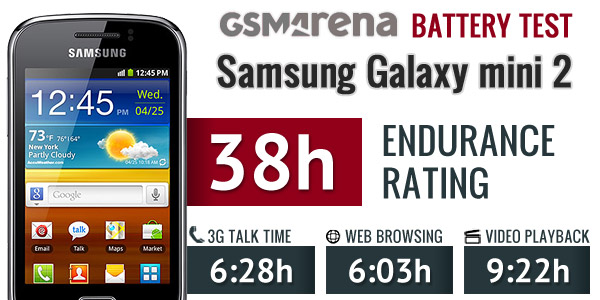 The general handling of the Samsung Galaxy mini 2 S6500 is pretty good. It's a compact set that's easy to operate singlehandedly and one that has decent grip. We like the asymmetric styling reminiscent of the Galaxy Nexus but we wish they used something fresher up front.