Slick gallery and file browser, but no real image editing

The Samsung Galaxy mini 2 uses the standard Android gallery, however a slightly dumbed-down version as it does not include an edit feature. The gallery automatically locates the images and videos no matter where they are stored. It can even import the online photos from your Google Picasa web albums.

Little about the Gallery should surprise you. It displays full resolution images and supports double tap and pinch zoom. Sharing images over Bluetooth, email and MMS is enabled, and so is uploading to Picasa or using DLNA to push the image to a compatible TV.

The Gallery offers only a few editing and sharing options

The My Files app is a simple to use but efficient file manager. It can move, copy, lock and rename files in bulk, even send multiple files via Bluetooth. My Files will only browse the memory card and the large internal storage (it can't access the system drive).

The Samsung Galaxy mini 2 uses the standard TouchWiz music player. Samsung have enabled equalizer presets (including a custom one) along with sound-enhancing DNSe technology and 5.1 channel virtualization.

By default, tracks are sorted into four categories - All, Playlists, Albums and Artists. From the settings, you can add or remove categories to set up the music player just the way you like it.

The album art has a central place in the Now Playing interface, but you can replace it with an equalizer. You can skip songs by sideways swipes. There's an onscreen scrubber, as well as a volume slider.

Another nice feature allows you to quickly look up a song on YouTube or via Google search. The handset also prompts you to select whether to look up the artist, the song title or the album.

The Now playing interface • Looking up a track

The Samsung Galaxy mini 2 is equipped with an FM radio with RDS. The interface is simple - there's a tuning dial and you can save as many as 4 stations as favorites. You can also play on the loudspeaker, but the headset still needs to be plugged in to act as an antenna.

The player on the Samsung Galaxy mini 2 can handle 3GP and MP4 video files, but not AVI's, which is a major downer. DivX/XviD support is missing, but at least we had no problems playing videos at up to WVGA resolution. Never mind the higher clock speed, Qualcomm processors aren't famous for wide video codec support.

720p videos wouldn't play, but that's overkill on a HVGA display anyway. But you're not limited to the Galaxy mini 2 display. Thanks to DLNA you can view photos and videos on compatible hardware - like TVs or computers with the right software (the latest version of Windows Media player for example).

The video player interface itself is as simple and as it could possibly be - there almost isn't one. You can use the Gallery or the My Files app to browse videos. The on-screen controls boil down to play/pause and skip buttons as well as a scrollable progress bar.

Audio quality is quite good

The Samsung Galaxy mini 2 did quite well in our audio quality test. It's not as good as a Galaxy S III, but we've seen way worse in this price range.

An active external amplifier lets the Galaxy mini 2 show its full potential and achieved some pretty good results. Its intermodulation distortion could be lower and the phone could be a bit louder, but it's still a decent performance.

The degradation when headphones come into play consists of a moderate hike in stereo crosstalk, and some extra intermodulation distortion. None of those readings is bad enough to be alarming though, and the other scores are once again great so the overall performance is quite good actually. 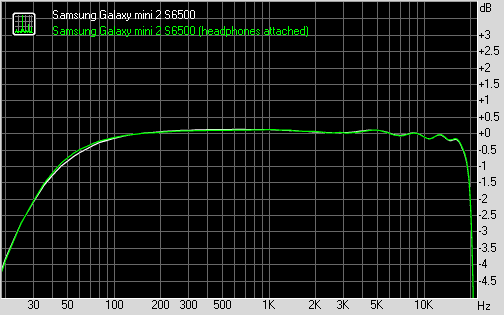