We've lived long enough to see a scaled-down version of the phone that opened the world's eyes to the concept of big phones - meet the Samsung Galaxy Note10. The original Note lives on in the 10+, but the Note10, size small, is the Note for those that didn't think they wanted a Note.

Barely larger than the Galaxy S10 and appreciably more compact than the S10+, the Galaxy Note10 has die-hard Note loyalists reaching for their pitchforks - Notes need to be bigger than the S-series, that's the norm. But if such reasoning stems from a time with one device in each of Samsung's high-end lineups, what's wrong with a double-Note double-S state of affairs (let's pretend for a minute the S10e doesn't exist for the sake of this argument)? 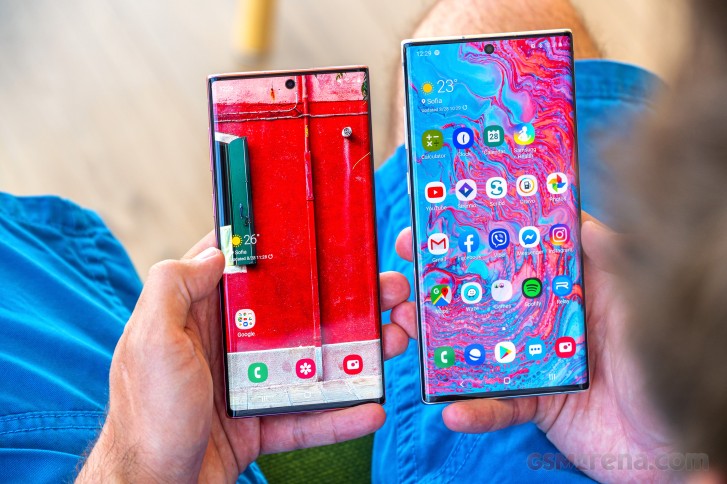 The Note10 features a 6.3-inch display - that's 0.2 inches more than the S10, which you could count as a modern loophole in the laws of the Galaxy universe allowing it to carry the Note badge even if it's smaller than the S10+. The 1080p resolution is what's a bit more troubling - the S10's smaller screen is QHD, and so is the Note10+'s 6.8-incher - that's one in favor of the 'this isn't a Note' team, which also proclaim that Notes need to be equipped with the best available hardware. And this one isn't quite there. But it's got plenty nonetheless.

To go with the smaller screen, the Note10 also has a smaller battery than the 10+ - logical. But a feature got lost in the scaling-down process - while the big phone supports up to 45-watt charging with an optional adapter, the plain 10 is capped at the 25 watts of the bundled brick.

A few other minor differences warrant the plus sign in the bigger phone's name. The missing ToF camera on the back of the Note10 is hardly going to be a dealbreaker for anyone, but we can see how some may lament the lack of a microSD slot, especially with the Note10 only available with just 256GB of storage. The 8 gigs of RAM could also make you feel bad, knowing that you can have the Plus with 12GB, but isn't 8 plenty, really? 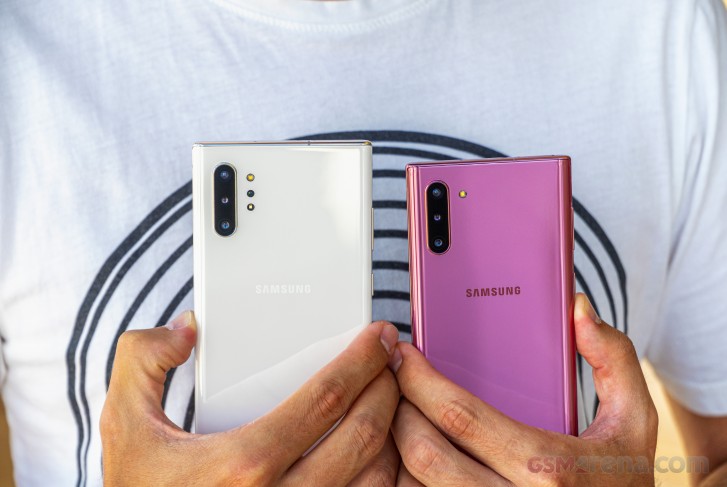 So far we've established that the small Galaxy Note10 isn't the fully tricked out best-of-the-best smartphone that people have come to expect of Notes. But does it need to be? Let's get it out of its box and start on this quest of finding out if the Note10 is worthy of its name and whether it's okay to get one even with all these cutbacks in specs.

The Galaxy Note10 arrives in the same (okay, smaller, but still) black box with a glossy life-size S Pen stamped on top, true to the color of the actual stylus you'll find inside - different paintjobs get a different colored S Pen.

Inside the box, you'll find a reasonably rich accessories package, with one notable absentee - there's no USB-C to 3.5mm adapter. Samsung's first flagship without a headphone jack ships without a solution for your legacy cans. You could try and spin it like it's the environmentally friendly way as there's no need to bundle stuff most people won't use, or you could call Samsung cheap for not including a dongle worth peanuts - your choice. In any case, there's a pair of nice AKG-branded earbuds with a USB-C connector at the far end, so you can get going right out of the box.

In a welcome move, for this generation of Notes Samsung has replaced the ancient QC2.0 compliant 15W Adaptive fast charging power brick with a modern 25W unit that adheres to the USB Power Delivery standard. A USB-C-to-C cable completes the link. 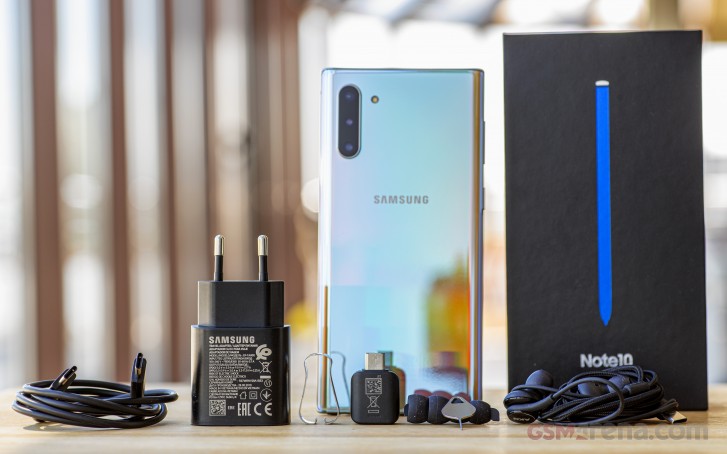 Depending on where you are in the world your Note10 may come with a USB-A-to-C adapter in the box (a couple of retail grade units here didn't), but we're yet to see a bundle that includes both this adapter and the microUSB-to-USB-C adapter we got with the Note10+ (a reviewers' unit sent to us from Samsung).

Fret not, the set of S Pen tips and the familiar pliers to replace them are still part of the package, as expected.

where did you get that from? Their testing says otherwise

Using Samsung mobiles for long time i am surprised that while upgrading software, always something missing. Always on display is missing in note 10 and available in note 20.What a software upgradation