Samsung is set to hold its Unpacked event next week in New York city where we are expecting to hear about the Samsung Galaxy Note10, Note10+, hopefully a 5G varirant, and a new Samsung Galaxy Watch Active 2 smartwatch.

Just Wednesday, Samsung pulled the wraps off of the Samsung Galaxy Tab S6 with S-Pen remote, Snapdragon 855, and 8GB of RAM.

Also on Wednesday, Android Headlines released a convincing render of the Galaxy Note10+ 5G, but it isn’t like ones we’ve seen before. This one is a Verizon variant connected to 5G UWB+ and the date on the lockscreen says August 23. This is the same date that the Galaxy Note10+ is reportedly going to become available in South Korea. 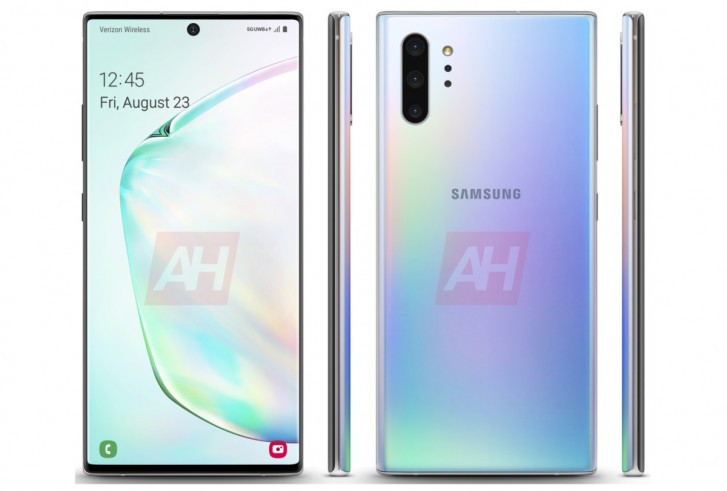 The color of the render is the rather beautiful “Prism White” that we saw on the Galaxy S10, but we wonder if it will have the same name with the Note10+. We also get a look at the sides of the phone, which strangely omit the power button on the right side. It seems with the Note10, Samsung is going to change the layout of the keys.

From what we can gather in the image, the power key has been relocated to the left side of the phone, just under the volume rocker. We can only assume that Samsung has built the Bixby shortcut into the power key, similar to how you access Siri on the iPhone X and above – by briefly holding the power key.

While the Galaxy S10 launched its 4G and S10 5G variants separately, the Note10 is expected to become available in both 4G and 5G variants at the same time, hopefully on August 23.

The Note10+ is expected to be powered by either a Snapdragon 855 or Exynos 9820 depending on the region. You’ll be able to get up to 12GB of RAM and 512GB of UFS 3.0 internal storage. Meanwhile, a 4,300 mAh battery will support a new 45W fast charging standard and possibly 20W charging via wireless.

There’s a triple camera setup, and an extra ToF camera, presumably only for the Note10+ 5G model. The main camera setup consists of a three aperture (f/1.5, f/1.8, and F/2.4) 12MP main camera, a 12Mp telephoto camera with f/2.1 lens, and an ultrawide 16MP camera with f/2.2 aperture. In the front is a single, centered hole-punch 10MP selfie camera.

The base model Note10 is expected to retail for €999 with the Note10+ is rumored to go for €1149 and an even higher premium is expected for the 5G variant.

I agree if your paying this much for the phone, you should be able to get ear buds if they don't come in the box.

Same thing i thought too bro... If the earbuds wasn't expensive,could have been a great one.. although wireless buds cannot be as good as the wired ones