Instead of straight-up reusing the S20 Ultra's camera system on the Note20 Ultra, Samsung's made a few tweaks, even if the main premise is the same. The basics are as follows - a big-sensor high-res main cam, an ultra wide angle cam, and a telephoto with a periscope lens.

The main camera is borrowed directly from the spring-time flagship. It uses the 108MP 1/1.33" Nonacell sensor that bins 9 0.8µm pixels into one huge 2.4µm one and outputs 12MP images - nonabinning Samsung calls it. The lens in front has a 26mm equivalent focal length and an f/1.8 aperture and is stabilized. We lamented the disappearance of the dual aperture on the S20 Ultra, and it's the same f/1.8-only situation on this Note.

There's no fancy omnidirectional PDAF like you'd find on the Oppo Find X2 Pro or the OnePlus 8 Pro - instead, autofocus relies on plain phase detection and is aided by a laser at closer distances. That's perhaps the moment to mention that the ToF camera from the S20 family is gone on the Notes.

The ultra wide angle module is apparently the same as on the S20s. It's based on a 12MP 1/2.55" sensor with 1.4µm pixels and uses an f/2.2 aperture lens that should deliver a 120-degree field of view. There's no autofocus on this one, an omission we're finding increasingly difficult to justify. 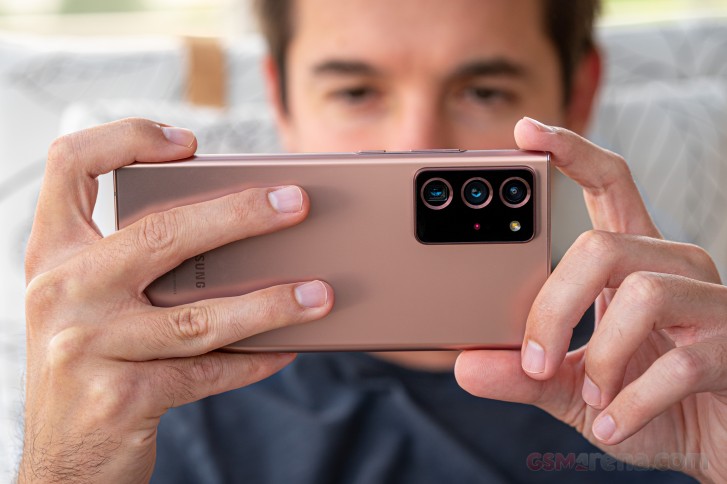 The optics have different parameters this time around too. The Note20 Ultra's periscope lens now sits at a 5x native zoom level (or a 120-ish mm equivalent) where the old one was at 4x. This lens also has a lower f-number, with the aperture specified at f/3.0 as opposed to the old one's f/3.5. It's really a minor difference in lens light gathering capability next to what appears a much smaller sensor. This lens is stabilized too, and autofocuses through phase detection. 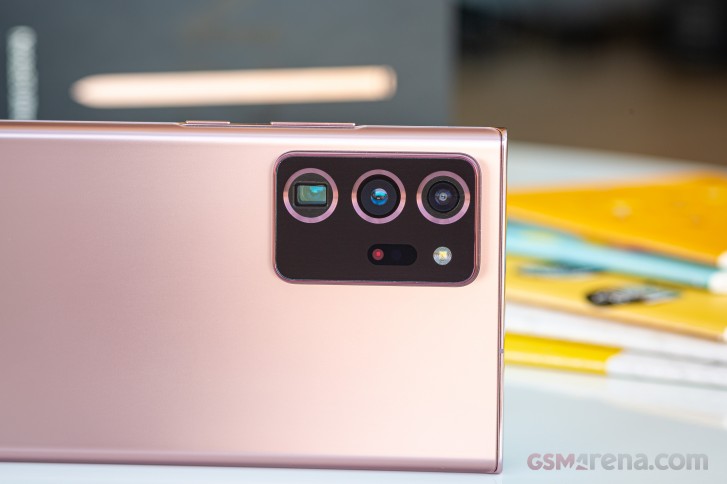 Over on the front, the Note20 Ultra doesn't get the S20 Ultra's 40MP Tetracell (or Quad Bayer if you prefer Sony speak). Instead, it's the regular 10MP selfie cam found on the S20s. It has a 26mm focal length and an f/2.2 aperture. Samsung's been fitting autofocusing front-facing cameras on flagships since the S8, and this one even has Dual Pixel AF - on Samsung selfie cams since the S10.

Samsung's been refining the Galaxy camera app over the years and the version found on the Note20 Ultra will be immediately familiar to anyone who's picked up a recent Galaxy. This one does have some peculiarities you won't find on lesser models, and a few new features are being introduced - as usual.

The basics will be familiar though - swiping left and right will switch between available modes, and there's an option to re-arrange, add or remove some of the modes from the viewfinder. Vertical swipes in either direction will switch between front and rear cameras. 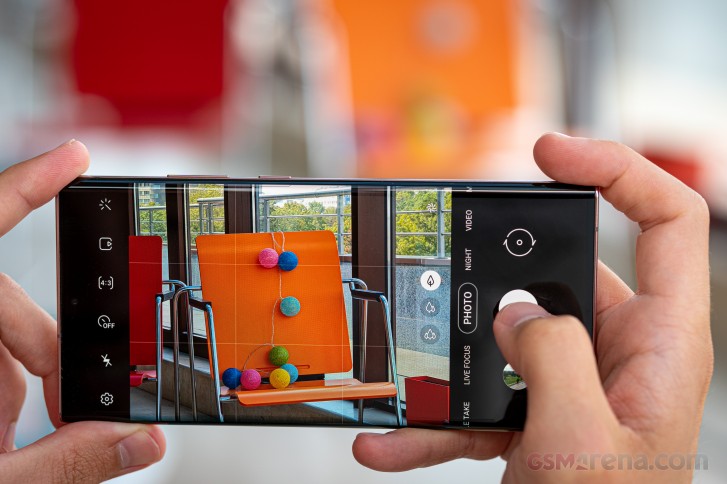 The familiar tree designation for zoom control is here too - three threes for ultra wide, two trees for man cam (moderately wide) and single tree for telephoto. What's a welcome change on the Note20 Ultra when compared to the S20 Ultra is that the telephoto tree takes you to the periscope's native 5x zoom level. On the S20 Ultra it would be 5x too, only that would come with a small digital zoom since its periscope was at 4x natively.

As before, once you hit the one-tree toggle, an extra set of buttons show up, with additional preset zoom levels at 2x, 4x, 10x, 20x and 50x (100x is gone, thankfully). It's still a bit finicky in that if you want to get to these other presets, you need to tap on one of the trees first thus switching to that zoom level first, but at least the trees now mean direct access to each cam's native focal length.

Selfie zoom levels remain a sore spot the way we see it. By default, you're getting a cropped in view equivalent to a 32mm focal length and 6.5MP resulting images. To get the full coverage of the camera, you need to tap on the zoom toggle. We guess that's our life now. There's the small compromise on Samsung's end that the phone offers a toggle in settings to enable an automatic switch to wide mode if it detects more faces in the frame - that one's been there since the S20s and it's the definition of a tiny victory.

Anyway, the viewfinder has the customary set of icons with the settings cog wheel located in the upper left corner of the screen. The usual stuff like video resolution, grid lines, location data, etc., can be found there, as well as the ultra-wide lens correction, tucked in under the 'Save options' category. You can also turn on and off the Scene optimizer on a global scale. HDR is handled in the new way we got with the S20s - it's Auto HDR on or off, but it's missing a forced on setting.

There's a Pro mode too and as a high-end model the Note20 Ultra gets the full-featured real pro version. You can select ISO (50-3200), push shutter speed around (1/12000s-30s), focus manually (with peaking), and select the white balance (by light temperature, with icons next to the number corresponding to a common light source). Metering mode and AF area options are available too, as well as a set of picture controls for contrast, saturation, and whatnot. As usual, there's no live histogram, which is all the more weird now when the Pro video mode has one - that just makes no sense. Another suboptimal bit about the Pro mode is that you can only use the main cam when in it, and that's not very pro, is it.

Samsung remains one of few makers that give you the option to launch the camera app, switch cameras (rear/front) and take a photo all with mechanical controls and no touch input - the power button does the launching and switching, the volume rocker serves as shutter release.

On the Note20 Ultra, this being a Note, you also get to operate the camera with S Pen actions. If you pull out the stylus, a small window with instructions will pop-up briefing you about the available actions and gestures. You can snap photos, switch between modes and even zoom in and out. Now, zooming is fiddly at best, and there is no way to switch straight to the wide, regular and telephoto cams, which we believe should be addressed with a software update. The other gestures, however, work great even if with a slight delay.

With the addition of Anywhere actions on the Note20s you may end up in the task switcher when trying to zoom, or get some other gesture misread, so we'd keep it simple and only use the stylus for shutter release or maybe front/rear toggle.

Ah, we almost forgot - Single take has gotten a duration selector in 1s increments between 5s and 15s (the default is still at 10s). We've grown to appreciate this mode in the months after it was introduced on the S20s and the extra setting is also to our liking.