The Samsung Galaxy Note5 and Galaxy S6 edge+ are finally official, the first - a month ahead of its established product cycle, the second - replacing the proof-of-concept Note Edge with a market-proven mainstream design.

It's become a tradition of sorts to expect a new Galaxy Note come September. This year the schedule has been shifted a bit in an attempt to give the phablet a head start over Apple's next gen iPhone Plus, which would probably be announced in the first third of September as well. 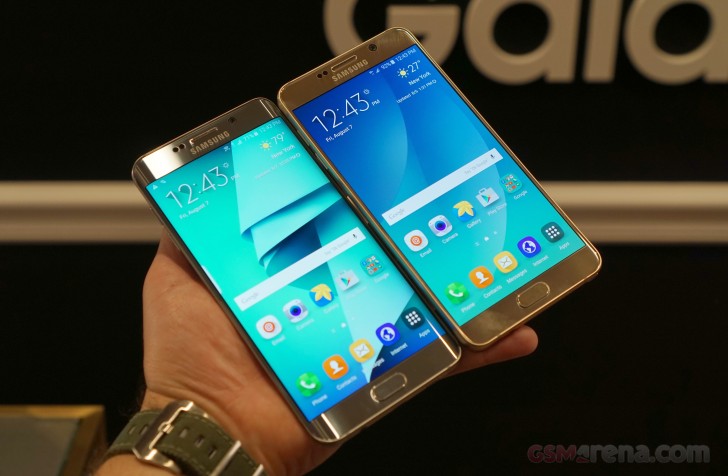 The Galaxy Note Edge, launched parallel to last year's Note 4, was the spark that ignited the whole edge-screen craze - a craze, which so rapidly turned into widespread adoption with only the second-gen device - the Galaxy S6 edge - that even Samsung was caught unprepared and couldn't deliver on the initial demand. This time Samsung has an even stronger trump card than last year's Note Edge - they're calling it the Galaxy S6 edge+, with hopes for the new device to inherit the immense success of the S6 edge.

A cornerstone in Samsung's high-end smartphone history, the Galaxy S6/S6 edge pair embraced a new design language, one that parted with the prevailing use of plastic and introduced more refined materials to finally live up to the price and features of the lineup. The Galaxy Note5 and Galaxy S6 edge+ are the first to follow in their footsteps, and the choices made before are here to stay.

That applies to the materials and style but also to the features, and precious ones appear to be gone for good. They weren't arbitrary decisions made in the blink of an eye though, and each has its reasoning, at least in the minds of the engineers behind it.

The expandable storage wasn't up to the standards Samsung itself set up with its super-fast UFS built-in memory and the microSD slot had to go. The user-replaceable battery fell victim to the dual-glass body, but fast charging and built-in wireless charging capability should supposedly help you forget about substituting batteries.

Samsung Galaxy Note5 side by side with the Galaxy S6 edge+

Much of the hardware comes straight from the smaller-screen flagships, which is no bad thing - the Galaxy S6 remains the reference in performance six months into its availability and with a bump in RAM it can only get better on the phablets. The 16MP primary camera with a fast lens and OIS is among the trendsetters too, as are the Super AMOLED display panels.

We had the opportunity to handle the Galaxy Note5 and Galaxy S6 edge+ for a few brief moments ahead of their announcement and we'll share our first impressions on the following pages.

Sucks. Non expanding memory!??? Samsung you got to do better! Note 4 and note edge were awesome now you just fall face down!

Im using note 5. Got an issue when charging it using the fast charging charger,the temp get hotter and hotter. Correct me if im wrong, should i not use it when charging or should i turn it off to avoid such problem. I tried both and the temp back to ...