So you appreciate the direction where Samsung headed in with the design of the Galaxy S6, but you enjoy the larger form-factor of the Note series? Well, then the Galaxy Note5 (mind the lack of a space before the numeral) is just the right phone for you, as it's basically a merger of the two concepts.

Of course, that's a bit of an oversimplification and the Notes have always been a lot more than a stretched up Galaxy S smartphone. Quantitative change leads to qualitative change, as philosophers would put it, and the size difference is not merely down to numbers, but brings genuine benefits in terms of productivity.

And productivity is where the Galaxy Note5 is meant to excel, much like its predecessors, thanks in no small part to the S Pen. The capacitive stylus has been redesigned yet again, but its core functionality remains precision pointing and pressing, there for those who value it, but certainly not in the way of those who don't.

Galaxy Note5 from all for sides

The Samsung Galaxy Note5 is built much like the Galaxy S6 - two slabs of Gorilla Glass 4 held in place by a metal chassis with an exposed metal frame all around. However, while the S6 had an ever so slight curve, top and bottom, all four edges of the Note5 have been kept straight. Coupled with the larger overall dimensions, this makes the phablet look blockier and more rectangular, though that's hardly a novelty among Notes.

The side bezels are pleasantly thin- not something you could say about the previous model. There are more sizeable bezels on both other ends of the screen but nothing really to complain about, and certainly nothing you wouldn't expect from a Samsung handset of late.

Galaxy Note5 in the hand

The front has gotten the 2.5D glass treatment for that extra bit of smoothness when swiping in from the sides - another mark of a premium device.

The rear is more interesting in that it's not entirely flat, but its sides are curved towards the front. We've seen a very similar approach with Xiaomi's Mi Note / Mi Note Pro pair, so it's nothing groundbreaking, but there's a different angle in Samsung's case.

Back with curved edges

Whether you opt for the Galaxy Note5 or the Galaxy S6 edge+, you get curved edges, it's just that one has them on the back, the other one - on the front. It's a funny design choice and results in more or less equally sized edges between the two, though inevitably the handling is very different. It also helps make the slightly thicker Note5 feel subjectively more compact than it actually is.

The arrangement on the back comes straight from the S6 as well, with the camera lens hump aligned with the central axis and the sensor/flash cluster to its right. A minor design tweak has now resulted in all cameras having a black insert behind the front glass element, while on the S6 the inserts were matched to the body color. What that means is that the lens will stand out even more on the lighter colored models, though the fact that the black patch is closer in size and shape to the always black sensor window arguably makes for a more consistent look.

We managed to download a few images off an unsuspecting Galaxy Note5 demo unit. The first three are what you'd call official camera samples (and these have been through Photoshop), while the final three we took right from the showroom floor. 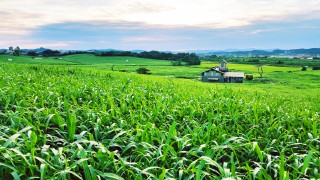 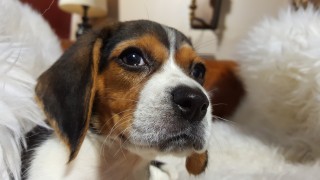 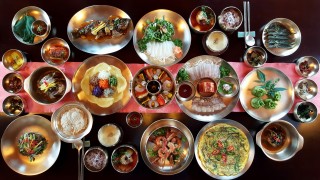 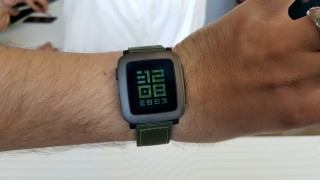 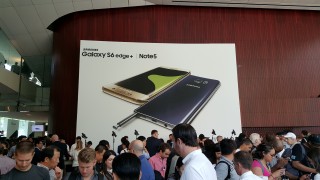 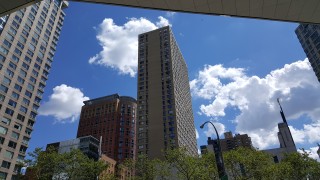 The Samsung Galaxy Note5 measures 153.2 x 76.1 x 7.6 mm, virtually the same height as the predecessor, but 2.5mm narrower and almost a whole millimeter slimmer. The slim side bezels are responsible for the decrease in width, while the thinness could be attributed to the smaller battery and non-removable back.

It's not a light device, all by itself, that's for sure. That said, it's 5g lighter than the Note 4, and at 171g it's closer to the Note 3. Current Note users will be used to the heft and won't complain. We do expect an outcry of comments demanding a larger battery if even at the cost of some additional weight.

The S Pen has been revamped, both in terms of hardware and software. Contrary to some initial rumors it's not auto-ejectable, you still need to pry it out with your fingernail, only now you have to click it first. The click action is a lot like an actual pen, but it has no other functionality once it's out.

S Pen in the hand

On the software end there's an all-new Air Command menu, which is no longer the tiny pop-up it used to be on previous iterations. It takes up the entire screen now with the icons on top of a strongly blurred background.

The usual Screen write, Smart select, and Action memo features are present but you can now add shortcuts to your favorite apps too for quick access with the pen. You can collapse the Air command menu to a floating icon so you can evoke it back without pressing the side button on the S Pen.

A neat new feature now lets you scribble a quick monochrome note with the phone still unlocked and almost completely dark. When you pull out the pen, a droplet-style visual cue appears in the lower right corner to indicate that you can start writing and you only get an eraser and discard/save buttons.

You can see how the new S Pen behaves in this short video we prepped for you.