Both the Samsung Galaxy Note5 and Galaxy S6 edge+ come with a 3,000mAh capacity battery. It marks a downgrade compared to the Note 4's 3,220mAh, but the more efficient chipset coupled with advancements in display technology may actually help the Note5 (or the similarly spec'd S6 edge+) pull ahead of the previous generation.

And while the Note Edge did come with a 3,000mAh battery and noticeably inferior battery endurance compared to its regular sibling, the Galaxy S6/S6 edge pair proved that that the edges no longer take a toll on the battery. Of course, detailed battery tests are in order, and we won't be passing judgement until those are out. 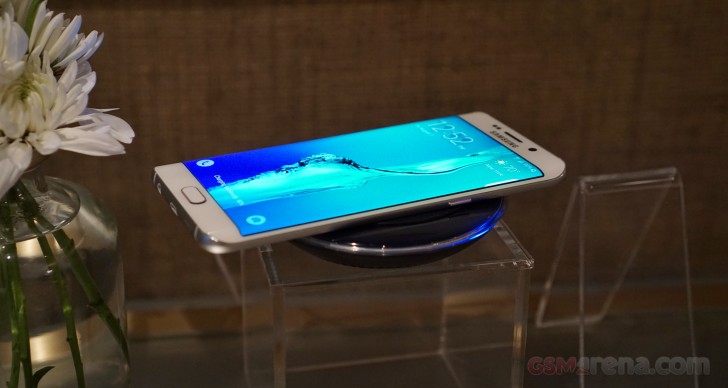 The battery is no longer removable, and that means one of two things, depending on where you stand. Those who never kept a spare battery in their pockets will go on not caring about it, while others will lament the missing feature and either look for third party backup solutions, or simply avoid the upgrade for the time being.

Additionally, fast charging comes in as a possible solution, and Samsung's implementation proved among the quickest in our dedicated test a while ago.

For the less intense charging situations you always have the built-in inductive solution - it works even faster now, up to 1A, and it's a feature more makers should finally start adopting. Samsung was proud to point out that its new smartphones support both the PMA and the WPC established standards (the latter also known as Qi), which brings an added versatility and also means that you can top up your smartphone on a number of publicly available charging stations.

The Samsung Galaxy Note5 comes with a 5.7-inch Super AMOLED display with QHD resolution which comes down to a density of 518ppi. The diagonal sweet spot was already established with the Note 3 and for third generation in a row it has remained unchanged. Rumors had it at 5.66 inches prior to launch, and even if that is indeed the case, you're unlikely to notice or care about a millimeter in the real world. What you'll love though, is the sharp QHD resolution, deep blacks and rich colors, not that we expected anything less than the best available panels from Samsung. 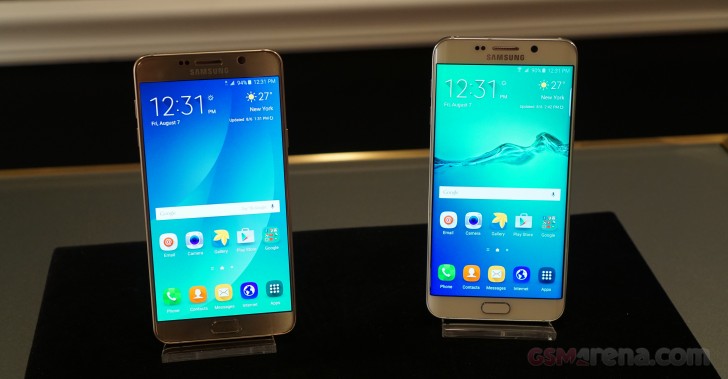 The Galaxy S6 edge+ is also quoted to have a 5.7-inch display, and the fact that you can't readily measure it should mean less grounds for nitpicking. It possesses the same qualities as the flat panel in the Note5, with the additional benefits in both feel and features brought about by the curves on the sides.

The Samsung Galaxy Note5 and Galaxy S6 edge+ both come with the same camera setup, we're already familiar with from the Galaxy S6. That includes the 16MP primary camera with f/1.9 lens and optical image stabilization, as well as the 5MP f/1.9 front snapper. And while the roots of the rear shooter could be traced back to the Note 4/Note Edge, the selfie cam is a step up for the phablet range. 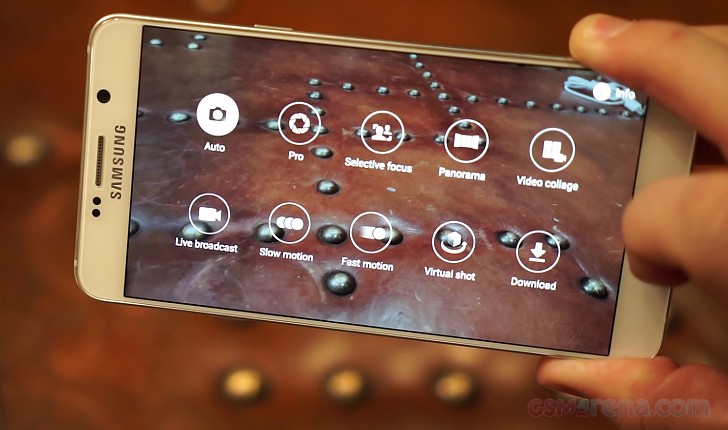 The hardware is virtually the same as the one used on the regular-sized flagships, but a new feature has been introduced in software. Samsung has partnered with YouTube to offer live broadcast from within the camera app, with no additional apps needed. It's a pretty straightforward solution and allows you to make your broadcasts public or only share your experiences with select few.

Samsung Pay was among the key points both in the development of the smartphones and in the event itself. The slow adoption of mobile payment systems has been attributed to the need to install new terminal or retrofit existing ones with NFC support.

Samsung chose to focus on the client side and equipped the Galaxy S6/S6 edge and now the Note5 and S6 edge+ with the MST (Magnetic Secure Transmission) tech. It boils down to a magnetic coil that can communicate with the same existing terminals, where you now just swipe your bank cards. The process relies on three levels of security: fingerprint recognition, Samsung Knox and secure phone storage.

The way the system works is you select on your phone the card you want to pay with, confirm with a fingerprint and place the phone in the general vicinity of the slot where you'd normally swipe your plastic card, and that's it.

Samsung carried out beta testing of the system in South Korea with no prior education to either the customer or the merchant. The customers were asked to try and use Samsung Pay, where the merchant was not even informed in advance, so they didn't actually know their terminals would support it, or should we say, that there's nothing out of the ordinary to support.

Of course it didn't go without hiccups, but the soak tests have been successful enough for Samsung Pay to launch in South Korea later this month, with beta testing starting in the US later in August, and general availability planned for September. The service will be supported by the Galaxy S6/S6 edge and up, which effectively means four devices total.

You can see the system in action in the short video below.